Every year since it began I’ve thought about running the local Thanksgiving morning 5k. Last year I even went so far as to visit the registration site.

Thanksgiving eve as I sat seeking motivation to retrieve my phone the lazy guilt gnawed at me until I up and registered.

I got up Thursday, fed the kids, put on my runnin’ things and moseyed on down to the starting line.

It was the best 5k ever.

Most of the serious runners in the area have bigger fish to fry which left me, slowpoke thought I am, passing more than being passed. I’m not going to lie; this was a first for me.

I am not fast but I can knock out 3 miles without stopping no problem. In this race that meant I finished easily within the first half.

The race was held at my normal running time with road conditions I’m perfectly accustomed too.

I made it through the first 2.5 miles without noticeably becoming anyone else’s speed gauge. You know when a nearby runner pegs you as their person to beat.  “As long as I finish before her I’ll be doing all right,” you can practically hear them thinking it every time they put on a burst of speed and stagger past you.

This time right near the end I started hearing somebody huffing persistently just over my right shoulder. It started a ways back and got louder and closer and louder and closer until I was thinking of stopping for a minute just to get whoever was causing all the racket out of my blind spot.  Finally, he passed me (thank goodness) and I was left in peace.  That is until he took a walking break, I passed him and it all started over again.  Rather than finish out the race annoyed by the noise I went ahead and crossed the street.  It was a good decision. 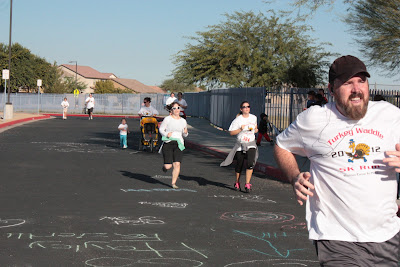 While I was running I didn’t think I was actually a pacer for noisy guy. I thought it was just unfortunate running proximity until Mr told me how just before the finish he gunned it to cut ahead of me.  That’s right the dude in the forefront of the above action shot was the noisy runner. I suppose maybe I should give him the benefit of the doubt.  Maybe he was just gunning for the finish without regard to whom he overtook along the way.

This was a low tech sort of event. There were no chips to fasten to shoes.  No sound system, announcements were made with a simple megaphone. I didn’t even get a bib number. They were all out. So I had to keep my own time.