When I was little I loved to watch parades on TV. I cared only for the floats and the ladies in pretty dresses who waved so funny. We always watched the marching bands though because we had cousins who marched. If the band was in red we had to pay attention and see if it was the Uintah band and if it was we tried our best to pick out our relations.  That’s hard to do when they’re in uniform, marching and on a tiny TV screen. We did it though.

One time I remember my Dad watching with us. He pointed out the drum majors. “But where are their drums?” we all wanted to know. So my dad explained how they’re called drum majors but their actual job is to lead the band and he showed us how they marched with their batons. 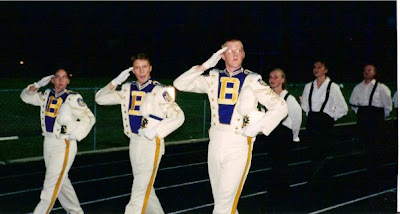 We got married and we had us a little drum major of our own. 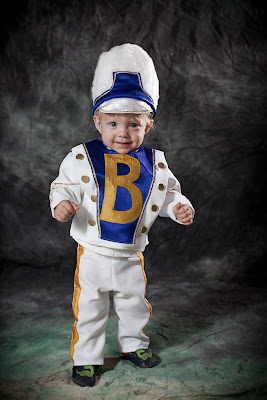 His daddy tried to teach him to march but he was only in it for the hat.(which he wore all night long without complaint) He would have been interested in the baton if he had one but Mr didn’t march with a baton so neither did Duke.

It occurs to me that Moo has heretofore left out of the Halloween posting. I think I did mention that she wanted to be a purple butterfly. I asked her if she wanted a fancy dress with the wings but she said “no,” just the wings would be fine.

I had a good time making her wings and I think they’re lovely. Sadly the wire I used is too weak so they collapse as she wears them but I really actually like them that way. They don’t look like wings then, they look more like slightly crumpled petals. Really pretty crumpled petals. It doesn’t make sense as to why a sweet little girl child is wearing the petals on her back but you can’t have everything.

I chose this next picture for the facial expressions.  Moo has entered that stage where she can’t figure out how to smile for a picture.  It’s either a glower, a grimace, or whatever it is you call the look on her face here.  It’s especially nice with Duke’s pout. 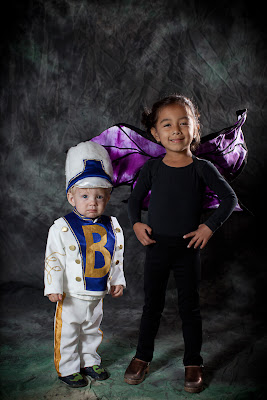 Here they are all four together. Again, I chose the photo for the expressions on the faces that can be seen. What you may not realize is that Zizza and Enzo are actually in the previous photo as well. They’re just that good at the whole ninja thing. 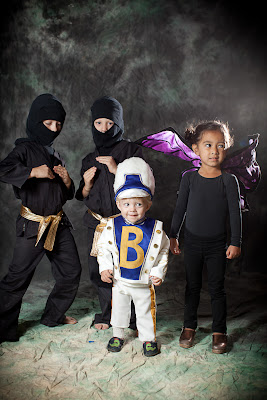 One Response to The Drum Major