Behold the bounteous harvest of our pumpkin plant.  We made the mistake of planting all our squash and melons next to each other.  We got some genuine cantaloupe and one good butternut but the watermelon were choked out and the pumpkins cross pollinated with something or other resulting in the cute little mutant you see here. 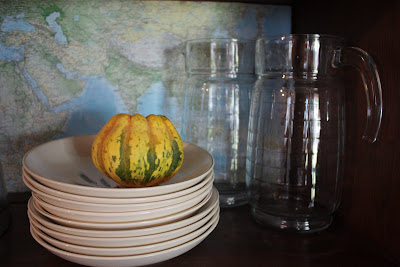 Our children subscribe to a proven method in naming things. Take the noun generally assigned to the object as your starting point.  You may chose to use the whole word or you may parse it down if you’re feeling brief. In our example we mixed things up a bit and shaved “pumpkin” down to “punk”

Next you consider the gender of the item, or really since generally the items being named don’t have gender (ie: a pumpkin) we assign one.  Now if the thing you’re naming is a girl you may chose between the suffixes “a” or “y.” If you’re dealing with a male object you have the choice between the suffixes “o” or “er”

Continuing with our pumpkin friend as an example we could have wound up with “Punka” or “Punky” had that particular vegetable been a girl.  Since he was established as a boy the choice was between “Punker” and the winner, “Punko.” That’s a good thing too because we wouldn’t have had enough spare bandannas on hand to accommodate a “Punky.”

Zizza and Enzo actually went back and forth for quite a while on this one. Enz dubbed it “Punko” the minute he saw it but Ziz made cases for “Pumky” “Punka” and I believe, “Pumpkina” before she admitted defeat and accepted “Punko” as the final word.

Punko was harvested from our back yard months ago and is a bit on the squishy side now that his season of glory as decor is in full swing.  Enzo has been looking sadly at Punko all week and sighing that he wishes our little friend had been big enough to carve. Maybe next year our gardening skills will be up to the task of producing carveable pumpkins.  But if we get a real harvest, what will we name them all?