My Enz suffers from severe indecision where Halloween is concerned. We’ve had back and forth from one costume idea to another to something entirely different every year since he started giving input of his costume.

This year we started out planing for a robot, then he swayed over to ninja so as to match with Ziz. Then we were back on robot for a while.  Then he was talking about bats of varying colors, gold being prominent among them.

Yesterday I sat him down and made Zizza zip it because she tends to fan the flame of his indecision. I asked him for the final word on his Halloween costume. I have the shopping list written out for all the other costumes so it’s time for him to commit to something so I can get a move on.

His choice was to be a Ninja. A Gold Ninja. No, wait a Ninja with gold pants a gold belt a green mask, one blue sleeve, one black sleeve and the rest of the shirt rainbow. Oh, but instead of a blue sleeve make it yellow.

Now, I am not a great at rendering but I can generally get the idea of a design across. I drew up his wishes and pulled out the trusty crayon box to make a full color picture of what he was asking for so he could see the idea somewhere outside of his head. Here it is. 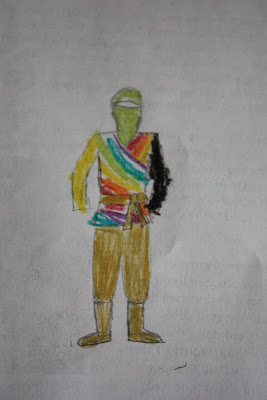 My hope is that he’ll hate the picture and scrap the idea so I can steer him back in the direction of a robot because that was going to be awesome.

I guess I could just say “no” to the technicolor ninja. I have no problem telling my kids “no” in practical everyday things but Halloween is about creativity. It’s his chance to imagine something cool and have his creativity affirmed and reinforced by me, his mama. I’m supposed to be his biggest fan, if I tell him his idea is lame and I don’t want to make it I’ll be teaching him to give up his own ideas and leave the creativity to other more qualified people, like me. See, now I’ve just about convinced myself that piecing together a rainbow kimono top is worth the trouble.

Anyway, Enz and I are going to have another costume discussion after school today. We’ll see what we end up with.