Enzo’s first parent night at school. He glowed the whole time.  First showing off his desk and turning each page of the books he’s made in class so far.  Then he and his classmates lined up to recite and sing.  He was smiling so hard he could only just hold in the laughter and he recited:

His arms snapped like jaws at the “crocodile.” He was the first kid to start buzzing after the bee line. His monkey hoots rang loud and clear.  Then I decided I should take a picture and messing with my phone kept me from paying as much attention to the other selections.

That always seems to be the trade off. I can give the performance the attention it deserves or I can try to preserve it in photographs.  I usually chose the former.  Pictures of these sorts of things aren’t ever any good anyway. My judgement was clouded this evening.  Here’s the best of my photos. 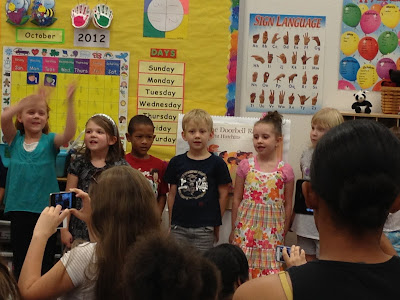 The only reason he’s not smiling as I described in this photo is because he was singing when I took it. The picture is so much less than the memory.  If I’d thought to take a picture before the program started I would have caught his barley contained smile and then I would have been able to pay better attention to the songs.  Lesson learned.  If I don’t get the photo before the things starts then I don’t get a photo.

I feel so lucky to have kids who love school after having been a kid who didn’t.  Thank heaven for the Mr’s genes.