I was sitting here trying to come up with an alternate post idea to the one that’s been brewing in my head all day. That one is rather insensitive. Poking fun at a person with whom I cross paths with regularly but have never met. It’s poking fun in a very “bless her heart,” kind of way but in the end I decided it would be in bad taste.

If bad taste is your style ask me in person and I’ll totally tell you.

So anyway, sitting here with my laptop and inner struggle when a nasty thing comes darting from my back door headed for shelter under the very sofa on which I sit.

The first name by brain landed on was “cricket” because it was the right size and color to be a cricket. Then I recognized that there was no hoping involved, just streaking across the floor…and that’s when I saw the pincers. Those awful pincers, sinister and gleaming dangerously in the partial light.

I searched around for something, anything to hit it with. That thing was fast I had no time to run for a shoe.

As luck would have it, (Or was it karma? I did pass on the mockery post after all) I found a flip flop close at hand. It took four strong direct hits but I felled the beast. It was a full two inches long. 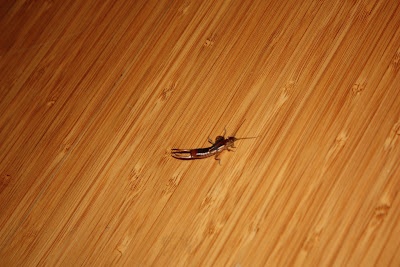 Ten minutes later and my toes are still clenched.

One Response to unsettling