Enzo came home Monday with a note and a concern. The note said that to celebrate the letter of the week (H) Friday (today) would be “hilarious hair day.”

I thought that sounded like fun but Enz was glum.  He said he didn’t want hilarious hair, he wanted his hair to stay just the way it was.

Ziz caught sight of the note and had all sorts of ideas of how to make Enzo’s hair hilarious. Slowly as the week progressed he became more open to the idea of hilarious hair.

My original suggestion to him after I read the note and he declared his devotion to his current hairstyle was that I could make him a false beard to sport in honor of the occasion. He said “no,” that day, but as Ziz worked on him about the whole concept he adopted the beard idea.

First he said he wanted one “Just right here,(scratches chin)like Pop used to have,” by the time Thursday rolled around I was able to talk him into a full beard. I pointed out that a goatee would have to be glued on and would thus itch. To that he said yarn whiskers on his cheeks “would be fine,”

Notice I didn’t post yesterday? Yeah, I was busy crafting this glorious piece. 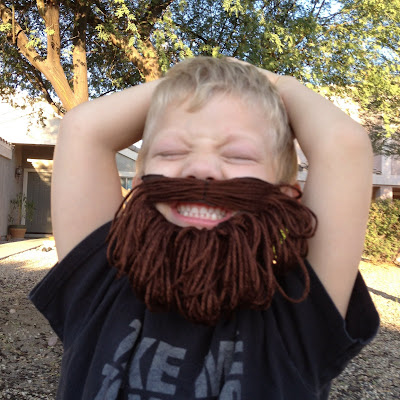 What do you think? Hilarious?