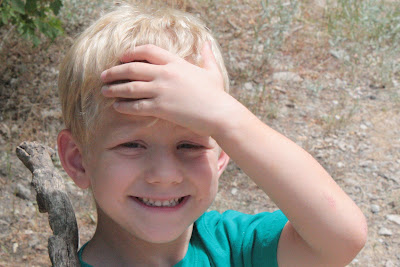 Today Enzo made it out to the pick up line before the rest of his carpool group.  I pulled up and he was just standing there a few steps to the side of the crossing guard waiting.  His own little person.  Not a part of a group of kindergartners, not an extension of his mother, just himself. Enzo, waiting for his friends to come out of school, waiting for his mama to pick him up. It was one of those defining moments where you realize your child has an identity independent of you.

Last Friday, the scene at pick up was nearly identical.  Enz, on his own, waiting by the crossing guard.  That day, he looked like my poor lonely baby.  I wanted to scoop him up, hold him tight and assure him that all was well. Sadly, parents are asked not to leave their vehicles during pick up so I had to content myself with pulling up to the curb and pressing the open button on the van door so he could hop in.

Apparently something changed between now and Friday.  Was it him, or was it me?

He is such a different kindergartner than his sister was.  For her school  is practically effortless. Every so often she encounters a challenge, and sometimes she complains about it, but once she takes a few minutes to think through things she’s back on top.

Enzo is different in that I can see the effort he’s putting in. I guess his learning process is more external than his sister’s. I volunteered in his class and I could see his concentration as he listened to his teacher. He begs everyday to do his homework. If I’d let him he’d finish his whole packet for the week as soon as he got home Monday.

While he works he pays strict attention to the task at hand. He’s an excellent and thorough colorer. He moves his pencil slowly and carefully as he forms his letters. He’s gotten in the habit of writing all the letters of his name as tall as the capitol at the beginning. I mentioned it once, asked him if he could try making the other letters shorter next time, and he’s been dedicated to that goal ever since. Those lower case n’s are getting shorter all the time.

When Ziz brought home a sight word list to memorize I sort of forgot about it. When the teacher put a reminder to practice in the class newsletter I had to ask for a new list. By the time I got it Ziz already knew them all and the next list as well.

Enz brought his list home last week and he is working on it. When he spots a sight word in a book he looks up with a mile wide smile and jabs his finger at it until he’s sure I’ve understood that it’s a sight word there on the page. He is working his little heart out and the result is he’s learning and growing in leaps and bounds.

There are so many different types of fantastic out there, what a joy to be sampling a new variety.