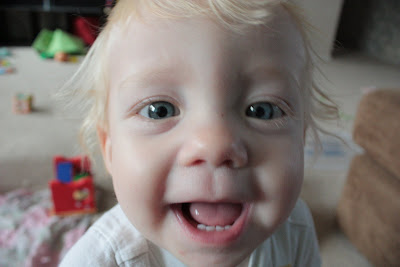 See that toy behind his right ear? It’s his favorite. It’s similar to this one. The four balls are what he likes most about it. I’ve confiscated the hammer because other things kept getting pounded with it and even when used as intended it was awfully loud. Also, it was beginning to splinter.

So what Duke likes to do is put the balls in the holes like eggs in a carton, admire his handy work and then take the balls out again. He has a ball in his hand approximately half the time he’s awake. 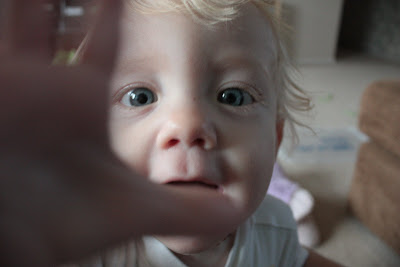 This afternoon he looked at the blue wooden ball in his hand, then he looked at his sister lying on the floor. He raised the ball over his head stretching his arm to it’s upper limit. Then with his arm still stretched, he walked around to the opposite side of his supine sister where he had better access to her head and smacked the ball down on it with all his wee might.

I think  Moo thought it was worth it just to see someone else in a bear-hug style time-out for a change.

I’m pretty sure his motives were purely scientific. Duke-boy’s a lover not a fighter. Of all my babies he is the snuggliest. Moo was rather snuggly, but in a different way. Duke’s snuggles are more intentional some how.

Bearing that in mind I wasn’t surprised to find that Duke is also much more interested in baby dolls than any of his predecessors were. He discovered Moo’s baby, Polka-polka, a few weeks ago. He carried and snuggled that baby doll for a good ten minutes before I got the camera out to take a picture of the sweetness at which point he lost interest. 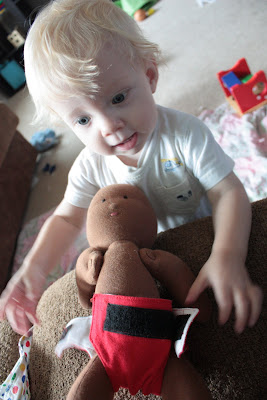 I tried to bring his focus back to the baby by showing him how the diaper goes on and off. Duke loves to take off his own diaper so you’d think putting the diaper on the dolly would be a surefire way to draw his attention back. It sort of worked.  As I suspected he was very interested in taking the diaper off but the baby wound up taking a back seat to the thrill of the velcro.  Ah well you win some you lose some. 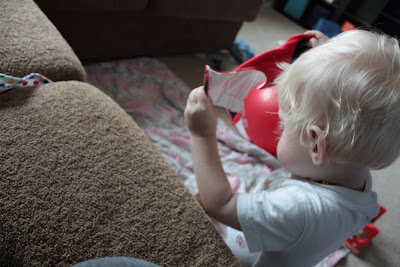