Yesterday I organized two wardrobes. This morning I packed two lunch boxes, two back packs and filled two water bottles.  Then I took photos of two kids outside the front door. 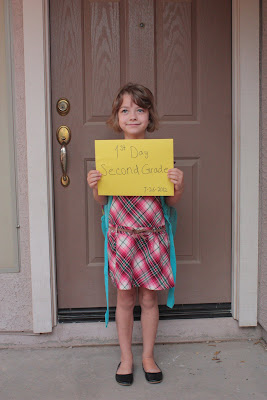 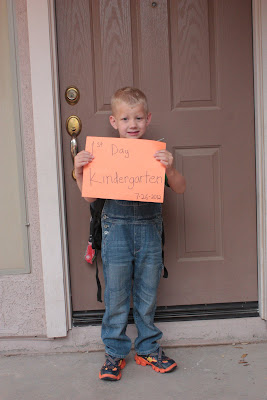 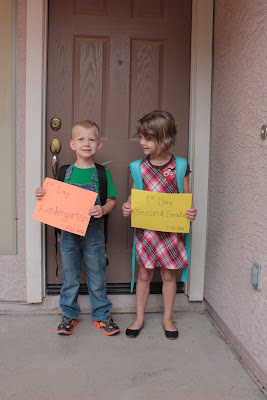 What didn’t I do? I did not drive my kindergartner to school walk him to the playground or watch him as he disappeared into his classroom.  The kids decided they’d rather have their father deliver them to their first day of school.  Just up and picked him over me.

So I guess I’ll just tell you about the part I was there for.

I got up at six, thought about how I’m going to be doing that everyday until June and mourned the death of my summer vacation.  Then I went in the kitchen and started breakfast. The Mr started up the stairs to wake the kids for their big day but I made him wait for me.  I wanted to see Enzo’s sleepy face as he woke up on his first day as a school kid.

We walked quietly passed the girls’ room.  Ziz, swathed in her sheet, was completely passed out which surprised me as she’s usually an early riser.

In we went to Enzo’s room to pat his cheeks awake.  His eyes fluttered open, he sat up, scrambled out of bed and went straight to his drawer to retrieve the clothes he’d picked out for the day.  (Yes the overalls were entirely his choice.  He saw them in H&M and decided immediately that they were the thing)

With clothes in his hands, and sleep in his eyes he plopped  onto the floor and began the task of dressing himself.  This is easier said than done when one hasn’t quite attained full consciousness.  He started out with his overalls backward. The Mr and I just watched and smiled.  He looked so sweet and big and small all at the same time, groggily trying to sort out which leg belonged to which pant. Sometimes you get to watch your baby grow up, other times it happens without your noticing.  This was one of the times we got to see it happen.


With a few gentle suggestions from his parents he managed to sort out the overalls but then he began buckling them over his naked chest without a thought for his t-shirt.  A few suggestions later, he was completely and properly clothed.

Somewhere during all of this Zizza came in wide awake and fully dressed.  The speed with which she transformed from sleeping mummy to alert schoolchild was dizzying.

Breakfast was eaten, off they went and then there we were. Just me, Moo and a still sleeping Duke.

Moo and I had promised the kids we’d make them a yummy treat while they were gone to school so we got on with that.  The school day is surprisingly short and the number of things I can manage to do when I have only two little darlings at home with me is equally surprising.

The three of us went grocery shopping, then we made not only cupcakes but also granola, and washed all the dishes before it was time to pick up the kids.  It was kind of amazing. 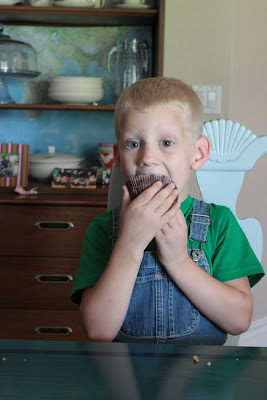 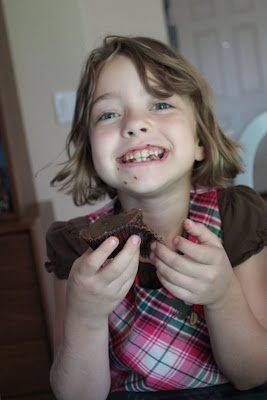 And thus, another milestone has been met. Enzo has been to kindergarten, Zizza has been to second grade, and Moo has been the big kid at home. The first day seems to have been a success, even if I was passed over at drop off time.

One Response to I was passed over