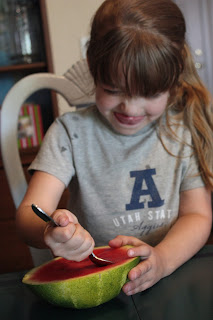 The bowl at the end of the melon is always a coveted summer time treat. I remember the first time my mama let me have one.  I asked if I could have it expecting to be refused,  and she said something along the lines of  “yeah, ok”

It was a very casual affirmative, as though what I was asking was in no way a big deal.  It was the kind of answer I’d expect to get if I’d asked for permission to read a book or play in the back yard: things I didn’t generally need permission to do.

The real kicker was, when I asked for the watermelon bowl that time it was between meals.

It was not lunch, breakfast or even dinner time.  Bold as brass I up and asked for a super cool treat right in the middle of the non-eating part of the day and my mother… agreed to it.
Just like that.
Without even batting an eye.
She didn’t sigh and say “oh, I guess” signifying that she thought better of but would rather give in than deal with a tantrum. She just said yes.

That was a good day.

After that I figured out all I had to do if I wanted the bowl was keep my eyes open when the melon was being sliced.  Practice patience as the half and three-quarters marks were met, and wait.  Soon the end would get too tippy to cut anymore off  and it would most likely become available. If there was a melon-baller in the equation I would be out of luck, and of course the other kids wanted the bowl too so I wasn’t without competition but just knowing the opportunity was available made a difference.

You may have noted that I only speak of the bowl and the final end of a watermelon. Sure, there’s a bowl and the beginning of the melon as well but with the whole massive fruit there to provide stability during the first cut, that one tends to be on the scrawny side. Mostly rind with only a bite or two of red juiciness.  The first bowl is for amateurs.

Of course it does have certain tactical merits.

You can do things like tell your little brother “Ok fine, you have the bowl. I’ll just wait until the whole watermelon is gone and have the other side,”

Now, there are a couple different ways you can play this.  I’ll outline two of them.  Both approaches have their merits.  You just have to decide which will serve best in the situation at hand.

The first is to act very benevolent and possibly a little sad to be missing out.   Go with this if there’s something you need from the brother in question. If he feels a little bit indebted things will be all the better going into future negotiations. The second is to act perturbed and impatient. This tactic works well because it leaves the boy feeling triumphant.  He’ll be so blinded by his good fortune, he’ll be less likely to notice when the time comes for you to claim your own true victory.  The little twerp  will think he’s won and all you”ll have left to do is bide your time until the real prize becomes available. Mwahahahahahahahaaa!

Anyway…what was I saying?  Oh, right. watermelon is delicious.
Have a nice day.