Last week at a church function I saw a woman wearing a match to that awful awful maternity dress that a year ago was the only thing I could wear.

At 36 weeks. Nothing fit any more and I spent the majority of my time wearing the Mr’s t-shirts and gym shorts.  If I had to leave the house for any reason I would squeeze into a slightly more presentable maternity something or other and keep my self on high alert lest my top should betray me and pull a Gus Gus.

These were the circumstances that led me to buying the dress.  I didn’t even like it all that much but it was the only thing I could find. So I wore that every time I left the house for what turned out to be six weeks.

Man I hate that dress.

Apparently the woman I saw last week had a better relationship with hers.  There she was wearing it, not even pregnant.  Her baby was a little younger than my Duke.  I’d guess he was about 8 months, but that’s neither here nor there.
I saw that woman and her dress and felt an overwhelming relief that I haven’t had need to wear mine in eleven months now.  Eleven glorious months of never wearing that dress again.  It’s a beautiful thing. 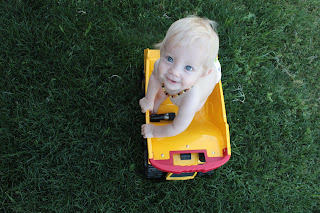 Just look what I have to show for it! The boy is walking, though he still prefers a crawl for speed. He’s become insistent on bringing his blankie with him when he gets out of bed and he’s been experimenting here and there with thumb sucking. He did that in the womb, I’m pretty sure, and once soon after birth but not again until recent weeks. Odd.

He’s also had a bit of a language explosion. He’s been saying “mama” and “dada” for quite a while now along with “hi.”  Then he started imitating syllabic patterns like crazy. He even tacked on the s sound at the end of his attempt as “There he is!” when we were playing peek-a-boo. Yesterday he said banana. Just to make sure I was really hearing what I though I was hearing I got him to say it three or four more times before I gave him one.

Turns out, he was just practicing the word. He didn’t actually want the banana.

Today he said Moo’s name. Called up the stairs to her all sweet and loving, then practiced it a bunch more times once she came down. 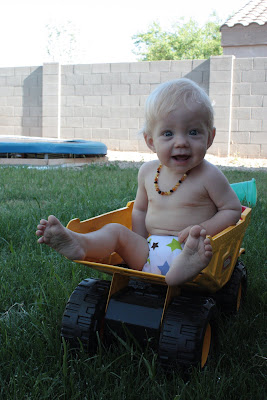 I keep telling him he’s tiny but he just won’t believe me.