Our current church schedule along with the developmental stages of the children have recently come together to reintroduce to me the wonder known as “The Sunday Afternoon Nap.” It is a joy, that nap.

Today as I drifted slowly back to consciousness at the conclusion of my delicious napping I heard thumping in the kitchen. I went to investigate and was met with disappointed groans. “Oh Mama, we were making a surprise for you!” I put on my best surprised happy face as I surveyed the scene. Water running into an already brimful sink, Enz atop the step stool gingerly running a soapy brush over a sopping wet jug. Ziz was beside him at this point, I guessed she was on rinse duty. I was wrong though.

“Enzo’s washing the dishes and I’m making COOKIES!” Zizza told me. “Whaaa?” came my eloquent response as I fought hard to maintain that surprised happy face. Sure enough, the old red and white cook book was open to chocolate chip cookies. A peek into the bowl of the mixer showed she’d already measured out butter and shortening. I double checked the recipe she was using, it called for 1/2 cup of each. Her measurements looked pretty accurate. I decided to let the cookie situation play out, and directed my attention to Enzo, only intervening with Zizza’s project when she directly asked for help. 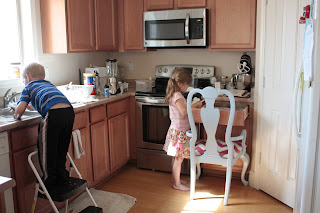 A closer inspection of the sink revealed hunks of shortening floating in what was supposed to be wash water. There were some things in the drain board I’d washed earlier and I double timed to put those away before Enzo could finish brushing that jug. A few shortening bathed dishes piled on top of their clean fellows in the drain board was the last thing my kitchen needed.

Once that danger had passed I drained the sink and refilled it for him with (mostly) shorting free water. Enz moved on and began brushing a spatula and soon there was a pile of shortening streaked dishes glistening greasily in the drain board. Meanwhile, Ziz was ready to start scooping her cookies.

Aside from one instance of confusion between a teaspoon and a tablespoon, the cookies had been mixed without a hitch. The measuring confusion occurred in the matter of the vanilla, and we all know (don’t we?) that cookies are all the better for a little extra vanilla, so all was well.

“At least we surprised Pop,” Zizza later consoled herself and Enzo. “Oh, girl” I assured her.  “You surprised me too. I was surprised in the middle of your project instead of the end, but I was surprised all right.”

When was the last time you were surprised?

One Response to my sweet sweet babies