I stumbled upon some amazing truth about learning to ride a bike.  It was quite a while ago, I happened upon this video.  Balance bikes!  Wow!  So much better than training wheels.  Who’s idea were training wheels anyway?

I wanted to implement what I’d learned immediately but Enzo was too little to reach the ground on his little 12inch bike.  The search was on for a 10 inch bike to hack the pedals off of.  All the while wondering why manufactured balance bikes were so darn pricey.  Long story short, we eventually found a bike at good will for a few bucks and made the modifications. For a long time he preferred to stick with a scooter during bike time, but after some cajoling he tried it and he’s been zooming around the neighborhood on his balance bike for months now.  He said he would make the switch to a bike with pedals on his birthday but last week the Mr suggested he give it a try and what do you know?  He got on and pedaled away!

Once he was riding with pedals it became clear that his bike was too small. His knees were up to the handlebars and the wheel base was so short he was practically on top of the back wheel. The plan was a bigger bike for his birthday, but we couldn’t wait.

Yesterday we were out pulling weeds, riding bikes and generally having a good old time. The new bike had been purchased and was waiting in the back of the Mr’s car. After watching him ride his tiny bike for a while, we told ourselves and each other that there would be no let down in giving it to him early since he’s got some other presents to open on his actual birthday. We called him over, asked him if he wanted an early preset (duh) and told him “The car’s the wrapping paper, open it up and see what’s inside!” 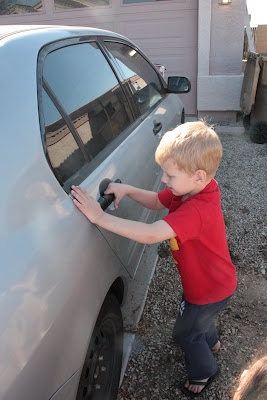 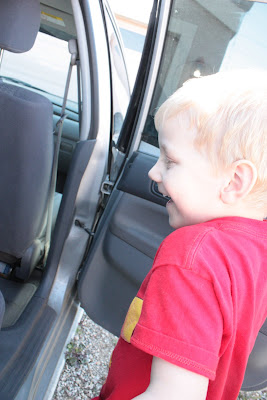 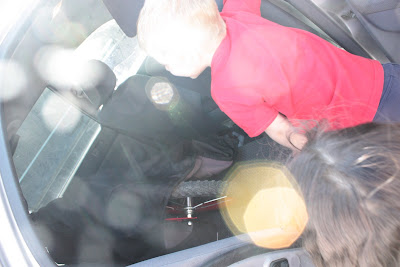 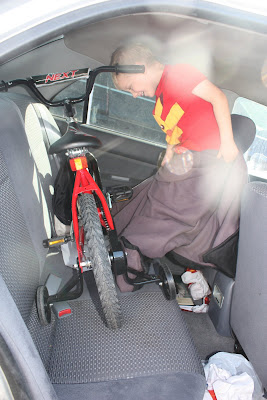 He had to wait a minute for the training wheels to come off, but then he was off tearin’ it up down the street and back. That boy can haul. The stroller and I had trouble keeping up with him even on the balance bike, we have no hope now.

He’s been talking excitedly ever since about his “two wheeler” as though the smaller bike he was riding before was something other.  His constant desire is to go out and ride.  I’m trying my best to oblige his as often as possible.

In a related story, I finally found a balance bike small enough for a 3 year old at a price I was willing to pay. Moo is the proud owner (or rider anyway we bought it as much for Duke as for her. He’ll get that big soon enough) of a itty bitty balance bike. She hasn’t caught on to the idea of pushing and coasting yet. She holds the handle bars, stands over the seat and takes tiny shuffling steps. I haven’t figured out how to convey to her the concept of coasting. Demonstrating has no effect, I tried moving her legs for her but once I convince her to actually sit on the seat and I take hold of her ankles to demonstrate the motion she stands up and we’re back at square one. I think I’m just going to have to practice patience until she figures it out on her own. It’s going to be hard, she’s really painfully slow and Enzo’s only getting harder to keep up with, but I think I can do it.