My last few posts have been such a pity party. “My baby’s sick,” “I’m sick,” “I cut my finger,” Boo-Hoo already, geez Eva. So today instead of posting about how Moo was sick last night, (four separate barfings within the hour of one o’clock) I’m going to show you a project I did.

Did you even remember I can sew?

I’m a big fan of Jodie’s I have a whole stack of her patterns. I finally got around to making one. I like it so much I went head and made it in quadruplicate. 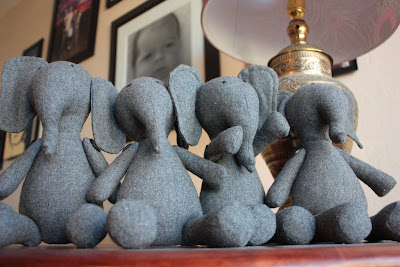 When Parsley and Beet the two elephants who are not quite big and not quite small first made their way onto my computer screen we were all (me Ziz and Enz) head over heels for them. In so much that those two still remember and occasionally ask me for “The elephant story on my computer,” It went without saying that I bought the pattern as soon as it was available for purchase. I just didn’t get around to making it for a few years, but I was determined to have an elephant per child this Christmas 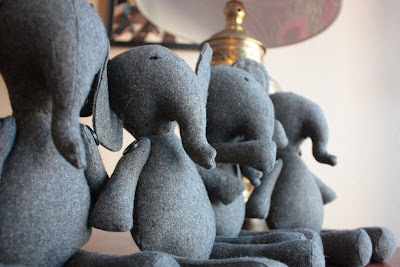 I was lucky enough to find nice wool flannel that was already grey, thus saving me the trouble of dyeing it. I ordered it in more than plenty of time and when it was delivered I found it much greyer than my computer screen had portrayed it to be. So much for saving time dyeing fabric. I had to put it through a number of bleachings to get it light enough to suit. They’re still decidedly on the dark side (Not in a may the force be with you kind of a way. My elephants are in no way affiliated with the Sith) but they’ll do.

One day, as Christmas drew near, one of our favorite babysitters offered her services free of charge (See why we like her?) I took that opportunity to get stitching on these guys. I’d had them cut and ready for weeks but I hadn’t found time to sew them without being observed. That day I did all the machine sewing on all four of the elephants in 1.5 hours. Not to shabby.

I planned to finish up the stuffing and hand work in the car on out way to Utah. That would have worked just fine if I hadn’t run out of stuffing mid journey. Once out of the car my time to sit and stuff diminished drastically.

On Christmas Day while the kids were napping (yep, I totally enforced quiet time on Christmas) I was trying my best to get these little guys finished up. Before I knew it the kids were up and there beside me. With the surprise factor out of the way I lost my drive to get the elephants done and put them away.

Three days ago when I finally pulled them out and completed the remaining minutes of work (four sets of button jointed arms and legs) I lamented that they’d already been spotted. They would have made fantastic valentines for those kids of mine.

Anyway, I made them and they are loved. Most notably by the eldest and youngest though the middles are fans as well.

Duke took his elephant in his hands gave it a shake, tasted a foot and thoroughly approved. He also enjoys manipulating the ears and grasping the trunk. Unfortunately for him, button joints mean close supervision so he doesn’t get as much pachyderm play as he would if it could live in his bed.

Ziz carried her elephant with her, held it in her lap while reading and generally adored it all day. In the days to follow she worked on finding a suitable name. While gazing at the movies on the shelf she toyed with “Charlotte,” or maybe “Enchanted” my comment on the latter was that an elephant named “Enchanted” could easily come to be known as “Ella Enchanted” (she got that book for Christmas) Now it wasn’t safe to call her elephant anything. She was rotating through names at such a rate you’d be sure to use the wrong one. How many times did I say “Ella” when her name was “Charlotte” or “Enchanted” when her name was “Ella” and Etc? Yesterday she finally settled on a name for better or for worse. The Elephant’s name is “Giselle” but her nick name is “Charlotte” so that’s what you should call her. 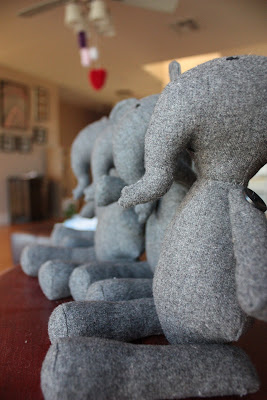 Zizza’s elephant being the most played with was also the first to break. Do you spy the buttonless hip joint in the photo above? See, I got to the jointing part and realized I didn’t have any suitable string for the job, so I just used black embroidery floss. The result is; I’m going to have to re-do all the joints as soon as I get some good string. Also, I didn’t have a good shade of floss to use for “character lines” on the trunks of my little friends so I’ll have to sneak them away one by one and add those lest these playthings be accused of undergoing botox treatments.

I’m going to let each kid chose fabric for his or her elephant’s wardrobe and dress the herd in the coming weeks.