He’s practically a grown up. 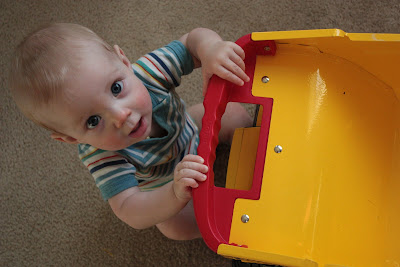 So close to crawling. He can do the hands and knees thing and he can do the propel himself forward thing, but he’s still working on getting them both going on at the same time. After a long stretch working on it both his knees and nose wind up red from being rubbed in the carpet. What happens is, when rocking on hands and knees fails to achieve forward motion he face plants, scrunches his legs up under himself and gives a mighty shove in the desired direction dragging his nose along the ground as he goes. Any day now his arms will catch up with his legs and he won’t need the nose anchor anymore.
He’s working just as hard on fine motor skills. During the past two weeks he’s gone from extreme frustration over his inability to release hard won cheerios from the vice of his fist into his waiting mouth, to working the pincer grasp like a pro. 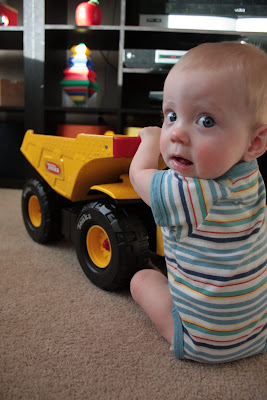