Last year I started the search for an advent calendar but I didn’t get much past searching. I decided on Martha’s Matchbox job for it’s general simplicity and itty-bitty fun-ness but then I couldn’t figure out where the matches were in the store (at the front by the ice freezers) and soon it was too late.

This year, having gained the knowledge of where to find match boxes, I got it done. I have a ziplock baggie full of matches in my cupboard but what-cha gonna do?

One side has numbers and the other has a picture, everyday we open a drawer, turn it around and put it back in. The only problem is I painted it up with out considering that the portion of the picture on each box would need to be both rotated and flipped in order to line up once it’s turned around. Does what I just wrote make any sense? Look at drawer number 6, see how the picture doesn’t line up? Bummer. 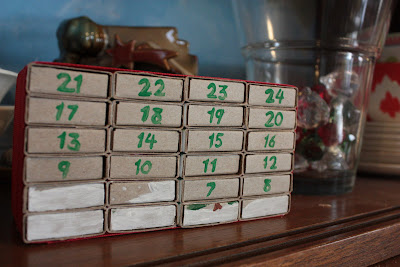 It was an easy fix though, I just turned them all around and now were working out way through turning them back again. The only difference it makes is that now the numbered side runs right to left instead of left to right. Live and learn. 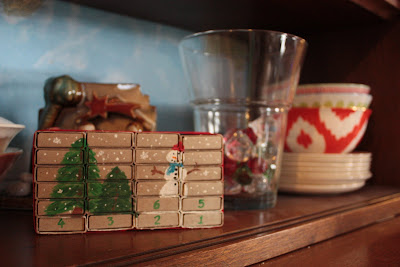 I write activities on little slips of paper and slip them in everyday. I didn’t stock the whole thing at the beginning because I wanted to be able to chose an activity that would fit in with the days activities. On crazy days we’re apt to find a paper directing us to do something like read a Christmas book, once it even said “eat a piece of candy.” On less busy days we’ve had things like snow paint, paper chains, baking cookies, and taking a drive to look at lights. We also took turns singing favorite Christmas carols in the glow of a flash light spot one day.

What do you think I should put in the box the day we drive to Utah? Sit in the Car and watch The Grinch over and over?

One Response to Advent box