Zizza was feeling a little anxious to get a present under the tree after both Enzo and Moo got their’s wrapped. (Moo bought rather than made) By Friday there was no holding her back, she simply had to get a present made.

Another thing Zizza was distressed about during the past week was her lack of play dates. (I hate that term, I don’t use it myself (wait, I just did) but I lack the power to expel it from the vocabulary of my children) Enzo and Moo had both played with friends during the week and she had not. This simply was not fair.

As luck, and strategic planning would have it, I downed the two birds with a single stone.

On Friday after school we invited her friend over to play and together they made air planes as gifts for their respective little brothers. The idea came from Pinterest. We had, a good plan for what Ziz would make for Enz already but she chucked it when she saw the shampoo bottle planes.   Here you see how our’s turned out. 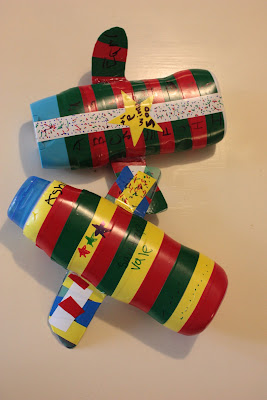 The girls had fun making them and I think they’ll be well received, but I’m not too sure how well they’ll hold up. My fingers are crossed for the strength of the hot glue. The total cost of this project was $3.50(ish) for a pack of 5 colors of tape. Not too shabby.

I’m pleased to report that  I’ve not heard a word of complaint from my dear Ziz on either front in over twenty-four hours. In other words, our Friday afternoon was a complete success.

One Response to To Enzo from Zizza