When Zizza was three I took her to the dentist for the first time. He took one look in her mouth and said these words “Braces Mom,” Zizza has a classic cross bite, the sooner corrected the better. Or so he told me. In other words, start the ortho as soon as her six year molars came in.

On that day I had a mouth full of fairly new braces. New enough that all the jaw aches and the feeling of brackets against my lips and the liquid diet were fresh and raw in my memory. Not to mention the challenge of getting one’s mouth clean when there’s so much extra hardware involved. “And I’m going to have a seven year old going through this?” I said to myself as the fear of that coming day bubbled inside me.

As my fear was welling that day, Zizza was experiencing some emotions of her own.  Feelings such as joy, anticipation, excitement.  She started telling people “I’m going to get bracelets when I’m seven!” I never did correct the “bracelets” thing.  Let her think the whole point is to accessorize. I was dreading it all enough for the both of us.

After some time, my “bracelets” came off and we both sort of forgot about it. Then recently it came to my attention that the required age and tooth count had been acheived. Again, I was afraid. On the other hand, here is what Ziz wrote in her “life book.” 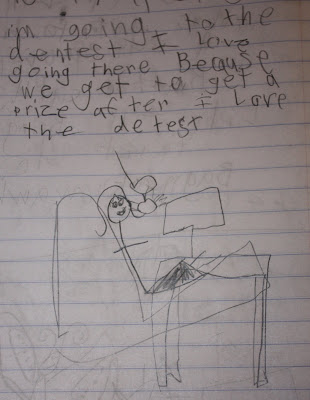 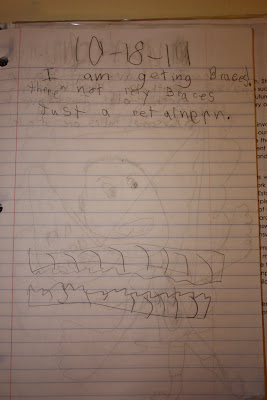 I looked at that entry and thought “Poor darling, she has no idea what’s coming,” She even chose to go in and have spacers put in on Halloween day so she could participate in the costume contest at the office. I asked her if she was sure about it, cause a sore mouth on Halloween would be a major downer. She assured me that going to the orthodontist on Halloween was what she wanted to do. Here’s what she wrote in her life book that day. 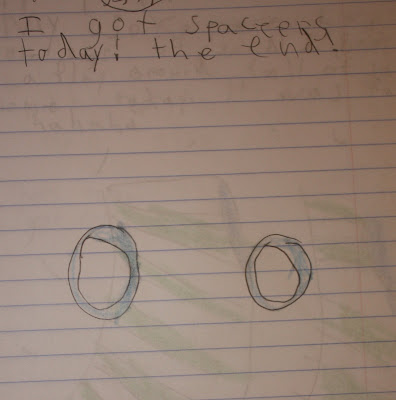 She wrote it immediately after the appointment. For the rest of the afternoon I watched her and waited for the awfulness to set in. I didn’t plan on trick or treating. Surely she would be holding her face and moaning by that time… But she wasn’t. She wanted to go.

The spacers were such a non-issue for her that when she went back a week later to have bands put on her molars and still more spacers inserted the event didn’t even warrant a life book entry. Today her “appliance” was inserted into her little mouth where it will stay for the next twelve months. She didn’t need traditional railroad braces, just a thing-a-majig inside her top teeth to stretch that jaw wide enough to seat properly with the lower jaw. This was good news, no brackets to clean around, no mashing wax into said brackets to keep them from ripping up the back of lips. She talks a little funny, she says it feels weird, but that’s it. This alone makes me think the head start on orthodontia is worth it.

I would have taken a picture of her new little brace face but in order to see the metal in her mouth she has to open up as wide as possible and lean her head back. like a commercial for a Reach toothbrush so I didn’t bother.

I do have a picture of the day her first front tooth (finally) fell out. It was another week after I wrote this that it had the gumption to wiggle free. Here you go, this is what she looks like, all toothless and orthodontically applianced. 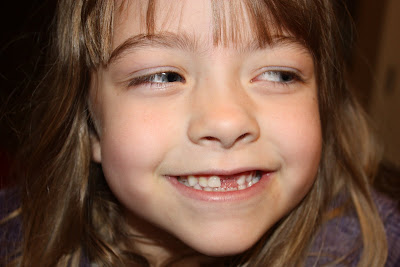