At some point in my early teens I saw a picture in a magazine of a baby in a lion costume. The mane was made of yards upon yards of curled ribbon.

Then and there I swore I’d do that one day.

The only problem was, I didn’t want to put my boy in yards and yards of curled ribbon but lionesses don’t have manes so would the costume really suit a girl any better?

Two years ago I decided dressing a girl as an effeminate lion would be fine, and I bought 80 yards of grosgrain ribbon in shades of yellow, tan and orange.

Then I learned that Moo would indeed be leaving us and the thought of making the costume and having her go before wearing it was too much. She ended up staying with us until June, but that’s another story. She and I wore the gypsy costumes I made the year Zizza was that size and all was well.

This year I finally used that ribbon.

Here is Moo’s scary lion pose. Watch out for those claws. 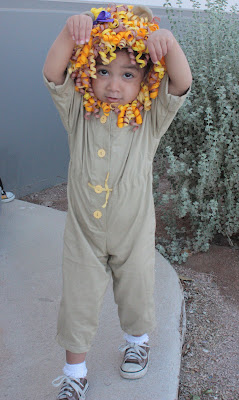 She roared every time she saw herself in the mirror wearing that get-up. It was a treat to take her to the potty.

Now, see the scratch on her chin? Yeah, she fell down in the street. She does that kind of a lot. I’ve been insisting she ride in the stroller as much as possible.

The scabs on her knees from falling 2 days consecutively had just come off when she caught the chin. Poor girl. 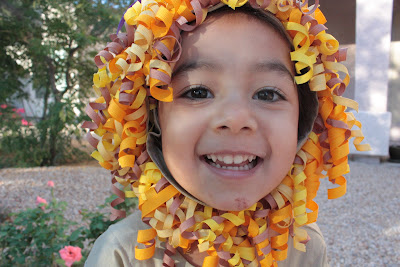 On the night of our church Trunk or Treat she had whiskers like Zizza’s that’s the only time I bothered though. Once the mane entered the equation whiskers didn’t make a big enough impact to me worth the trouble. 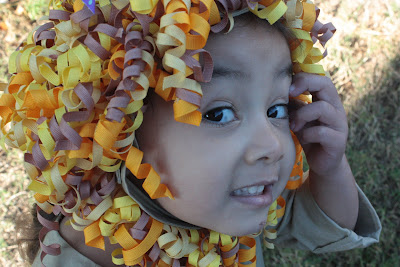 And in case you wondered, the lion did have a tail. 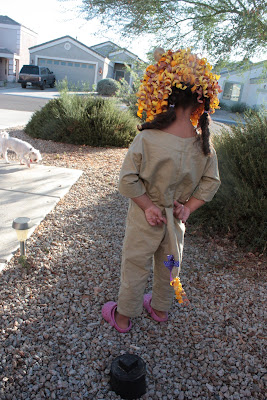 One Response to Rawr!