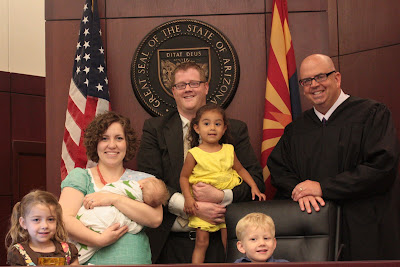 We made it to the courthouse just ahead of an ugly looking dust storm. Milled about in the hallway for quite a while talking with our attorney and CPS worker. The kids all played various games on any phone or other device they could lay hands on. Well, three of them did. Duke, after observing what there was to be observed in the hallway fussed a bit and then went to sleep.

At length, we filled into the courtroom and took our seats. I was put under oath while holding a sleeping infant and probably swaying a little bit.

Soon enough all was said and done and we were the legal parents and guardians of all four of our children.

I guess it was kind of a big deal.

For me though, it didn’t feel all that momentous. (The evidence of the non-momentusness I was feeling can be observed in the everyday hairdos the girls were sporting) There have been a lot of other days, hours and even minutes during this nearly three year process that have held more poignance as far as I’m concerned. Likely most of those moments will never be noted by many outside of myself.

This was a big day, a noteworthy day, but also it wasn’t. She’s been mine for a long time already.

8 Responses to Our day in court