Here he is, four years old to the minute. His sleeping is much more grown up this year. 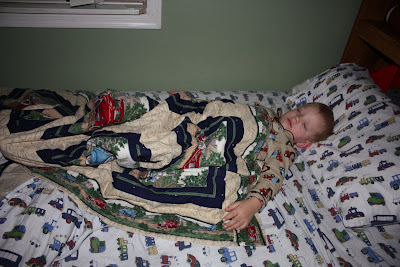 A few weeks before his birthday he saw a photo of rainbow pancakes and was completely taken with them. I promised to make him some for breakfast on his birthday. I went ahead and made the decision to make them silver dollar pancakes. It seemed safer than presenting a four year old with a stack of six full size flap jacks. 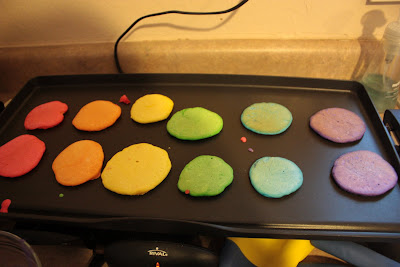 It would have been a complete disappointment to see all the colors of batter being cooked up and then settle for one or two rather than a full multi-hued stack. 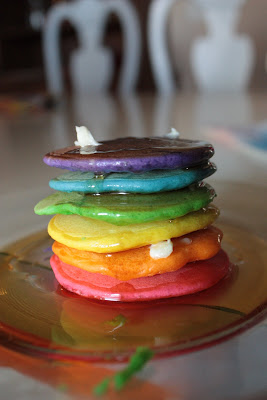 If you’re like me, you enjoy your pancakes topped with nothing but plenty of melted butter. I thought the color wheel presentation was better in this case. 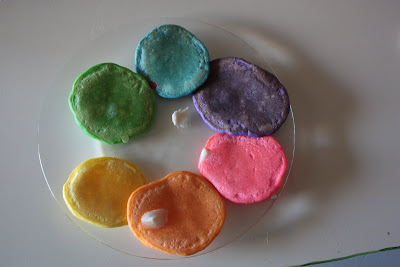 The rainbow pancake plan didn’t take long to morph into a theme for the entire birthday celebration. Enz let me know the day before that he was expecting his gifts to be adorned in rainbow paper. Lucky for him, they had some at Target. Ziz spent a exhaustively long time decorating her gift to him. Give that girl a package and a sharpie and she will go to town. 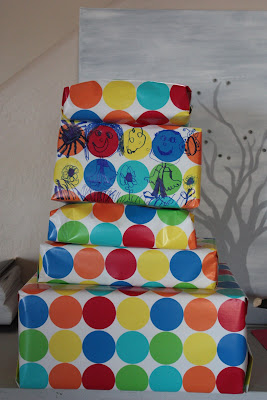 We did’t have birthday cake for over a week after the actual date had passed. I think he actually liked it better that way. One day of reveling wouldn’t have been enough to satisfy him.

That’s a toy garbage truck on top of the cake. Drawing from last years’ experience he and Zizza (she just can’t keep her nose out of his birthday business) established that his cakes should always be vehicularly adorned and a garbage truck is what they settled on for this year’s festivities. Also there was a 4 made of jellie bellies. I kept it super simple on the outside because on the inside… It was a rainbow of course. 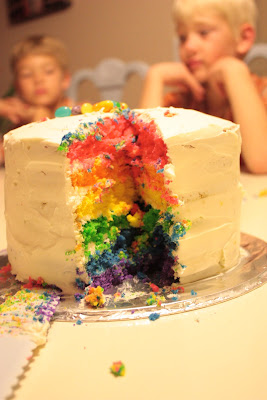 I took this slice photo the next day when the sun was out allowing for some decent light. You would think I’d have chosen a more photogenic plate for the photo, but to be honest, I’d just cut the slice with no intention other than to eat it. The photo came as an after thought and switching from the Disney princess plate just seemed like too much work at the time. I was hungry ok? I just had to snap that photo so I could put the cake in my belly where it belonged. 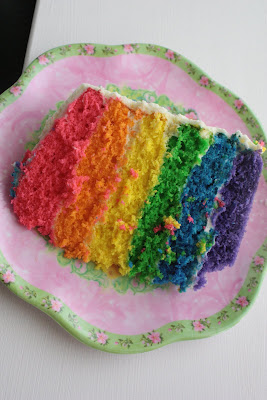 By the by, I used this cake recipe with a little extra milk as the reviews suggested. (I made two batches divided into 3 layers apiece) I was looking around for a good but basic (I didn’t want to have to divide all the eggs and then figure out what to do with the yolks) white cake to start with. One of the reviews said this cake basically tasted like a really good moist sugar cookie. I hit “print” right then and there. My search was over, and I wasn’t disappointed.

This is the frosting I used, super yummy. The recipe is ample for icing your average 2 layer cake, but it was down to the wire to get a thin coating over the whole thing once I’d stacked all six layers.

I used this tutorial as a guideline for my rainbow construction. It saved me a lot of frustration, and saved me from over cooking the super thin layers.
In closing I’d like to say: Happy Birthday my dear sweet boy and long live rainbow cake.

2 Responses to Enzo’s birthday. This time with pictures