Valentines day took a bit of a back seat this year. There were no cookies and thus no annual cookie contest. I think I have a photo of the valentine I made a few years back that was the inspiration for the contest in the first place. A little bit later I might find that picture and use it for a similar contest here in the next few days.

What I did for the holiday mostly happened a few weeks ago before Miss Moo came on home. These were things like decorating my hutch. 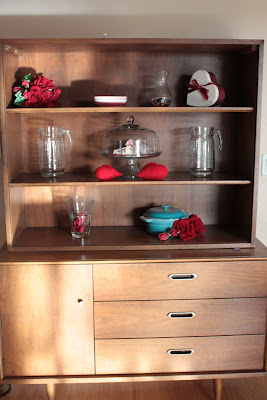 These are the flowers from my wedding dress. That’s my bridal bouquet in the upper left hand corner. My mother’s corsage from the wedding is under the cake dome and the Mr’s boutonniere is in the vase on the bottom shelf. We used silk flowers so as to protect our floral budget from seasonal inflation. It’s the price (one of them) you pay for having your wedding on February 15th. 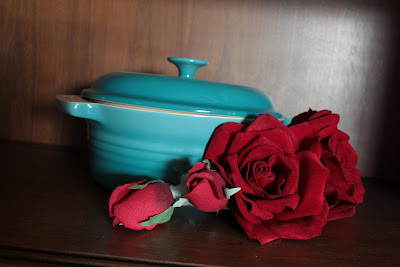 I found this pattern for amigurumi hearts in mid January and managed a few before things got too crazy.

On this particular heart I found that I’d been working into the back side of the stitches for the entire round after I’d joined the two humps. Instead of correcting my mistake I pretended it was a textural detail I’d planned to add and carried on. 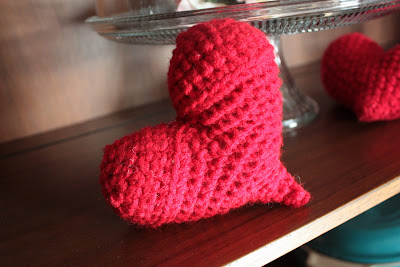 Yesterday for church, Enzo donned his red and white spotted bow tie in honor of St Valentine. I thought it was especially handsome with his blue shirt. 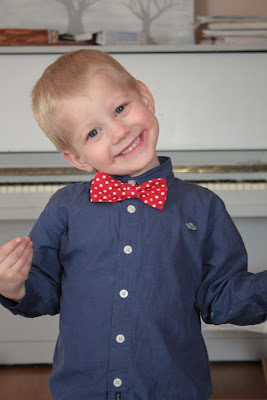 Oh, and guess what. At “meet your teacher” night at the beginning of the school year there was a list of holiday parties for mothers to sign up to help with. I asked Ziz which two parties she’d like me to contribute to and she picked Halloween and Valentines day. I’ll be honest. I influenced that decision a bit. Those are, in my opinion, the 2 best classroom parties of any given year.

So anyway, months and months ago with Moo freshly gone and no inkling that she’d ever be back at any time, least of all the beginning of February I signed up to lead the charge on the Valentine party. Luckily the other mom who signed up didn’t know I’d done so as well and was pretty well organized by the time we met up.

My main contribution was running a gum ball necklace making station. I came up with a method to simplify the process to a kindergarten level. I still have plenty of gum balls so I’ll make a few more and show y’all how it rolled here in the next few days.

With Moo having been here just over a week I thought it was unwise to try and leave her with anybody so I planned to take her along. Normally younger siblings aren’t supposed to come to school during class time but allowances are made on party days.

Zizza thought it was such a great idea she begged for Enz to come too. She wanted to show him all about how kindergarten works. She talked and talked about how he could sit with her at rug time and since the chair across from hers is normally vacant he could take that place at her table.

For the beginning of the day it went just like that. He sat with her at rug time. He responded along with the class, and then moved from the rug to the seat across from Zizz carefully following her instructions during the conversation heart organizing activity. He blended in so well anyone who didn’t know would have thought he was a kindergartener himself. After that though, he got sort of bored and spent some time trying to get my attention while I was busy threading needles and hot gluing ribbon and showing kids how to use the holes I’d pre-punched in the gum balls rather than trying to punch their own with the dull pointed needles I’d given them. Then he went out to recess. Whew, he needed it.

Only it turns out that he was apparently not allowed to go to recess because after a few minutes an Aid brought him back in. The teacher (a sub today, she was fantastic) talked to him about what happened. “Did you get hurt? Was there sand in your eyes? Did you fall down?” No, no and no were his answers. “A girl just got me and brought me inside” he said, eyes running over as his voice began to crack. “Well,” said the teacher “How about you come with me when I go out to get the kids in a minute? You can be the head of the line and lead all the kids back to class.” He agreed to that and then I took Moo to the stinky stinky stinky kindergarten bathroom for the seventh time.

Girlfriend pees at least every twenty minutes. I am not even exaggerating. I took her to that stink hole no fewer than 10 times during the course of afternoon kindergarten. It’s lucky I’m not suffering from the retching tendency I had during my last pregnancy. I would have been dry heaving from the moment I opened that door.