I looked forward to lunch time all morning long. Actually I started looking forward to it last night as soon as I’d finished my dinner. 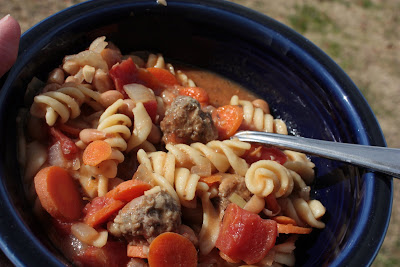 The recipe was called “mini meatball minestrone” but I don’t know if I can really consider it minestrone without any greens. I didn’t notice the lack while I was cooking. It was as I was eating that I thought. “Wait a minute, minestrone should have some greens!”
Next time I make it there will be greens. Mark my words.

Oh and on Sunday I (we) made Grilled brown sugar pork chops and apples. Oh boy was that delicious. 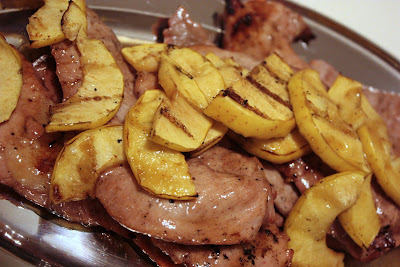 The chops I used were thinner that the recipe suggests. They were fine but next time I’ll use thicker ones. Also, I marinated my chops for about 6 hours in equal parts apple juice, apple cider vinegar and the prepared glaze. Next time I’ll cut down on the vinegar. I still want some in there, but it was encroaching on the sweetness I was after in the dish.

Tonight were having pasta and sauce out of a jar. No one can be awesome all the time. Sad but true.

So far in the 22.5 weeks I’ve been preggers I’ve only purchased 2 tops. Everything else I’m wearing is left from last time. I would be more than pleased to buy some new clothes that fit my current style sensibilities (not to mention my physique) rather than those of my four years younger self who was in a more casual state of mind than I’ve ever found myself before or since. The problem is, my current style sensibilities rely heavily upon the cinched waist which is obviously not an option currently so every time I’ve tried to shop I’ve failed to find anything.

I don’t even know what I’m looking for. I could make something but I don’t know what I’d make.

I have never had this problem before. I always know what I want to wear. Always until now.

The other night Zizza said to me in a pitying voice “Mom, why don’t you wear some of the shirts you had when you were pregnant with Enzo?” I told her that I was and she said “Well, it doesn’t fit.” Her tone implied that she found her efforts to be fruitless and thus washed her hands of the whole affair.

The truth is: there was an inch or two of bare belly peering out from the hem of my shirt. But listen, I wore this shirt clear though to the bitter end with Enz with nary a problem. Now, I know I am larger at 22.5 weeks this time that I was at 22.5 weeks last time but I am certainty a good deal smaller now than I was at 40 weeks previously. So either all my maternity tops shrank during the four years they sat idle in the closet, or they all shrank during the last months since they’ve been worn and laundered regularly again. It’s a mystery. Oh, and I’m wearing all the same pants too so that explanation is void.

That having been said: last night found myself browsing the etsy shop cocoricooo and while there I found things that I thought I might actually be interested in purchasing. It’s the first time that’s happened since the commencement of waist thickening a way back early October. Here are my selections. 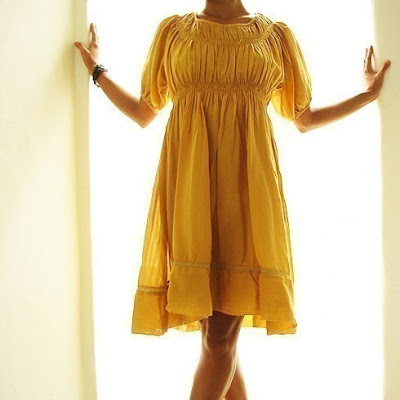 I would most certainly need to wear it as a top as it would be on the super short side once it draped over my belleh but I’m digging it just the same. The only problem is mustard yellow can be a tricky color for me. The dress also comes in red, but too earthy a red for my taste and a lovely coral shade. Now coral absolutely sings on my skin but I’m just not feeling it this time. I think I’d rather risk it with yellow. If the color in the picture reads true that shade will be fine. Still, it’s a risk.

The second item is the Please me blouse in green 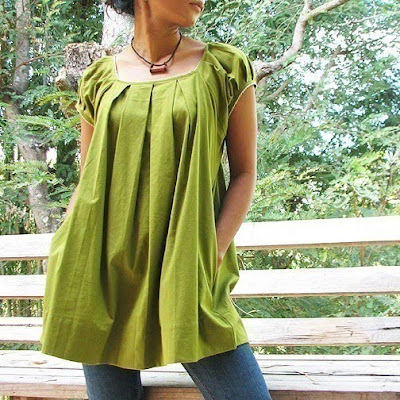 I’ve mostly avoided that shape in maternity wear favoring instead stretchy tops that fit along the underside of the belly. The few things I’ve worn that flow free have had the tendency to occasionally float up and show the vast white (and pinkish red) expanse beneath. The scary thing about it is that since these tops hang there allowing breezes at all times, one generally isn’t even aware of it when the unfortunate event occurs.

But, if the top is long enough for model girl to wear as a mini dress, it should long enough that I’ll be safe wearing it in the family way. Right? I’ll have to get my measuring tape out and investigate this.
The top does have a nice thick hem the weight of which would help prevent any unfortunate belly flashing. That’s a definite point in it’s favor.

Also, I’m pretty cheap about buying clothes. I would never pay what these cost (plus shipping) in a store. But If I made them and was selling them I would most definitely charge that much or more depending on the cost of materials. I was actually really impressed with the low cost for handmade clothes in the shop. It wasn’t until I started thinking about actually parting with my own money that it occurred to me to think of the clothes as anything but bargain priced.

I’ll think this over some more this evening as I slave in the kitchen to boil pasta and take the lid off the jar of sauce.

3 Responses to Feed and clothe