You remember don’t you how broken up I was about Enzo’s decision to shed his flowing locks? So how, you may ask did I reconcile myself to this? 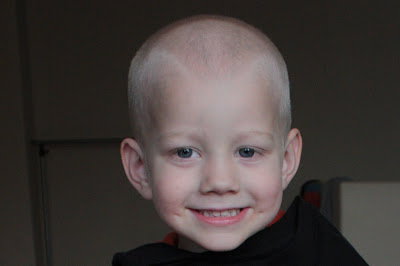 I’ll be honest. It hasn’t been easy. Let me tell you how it happened.

One week ago today my Tuesday was winding down, and it had been a long one. I’d been home all the live long day with the pair of restless kiddos Sunday, then again on Monday (Dear strep, if I ever get the opportunity I’ll punch you in the face) Tuesday Ziz had finally had her full 24 hours of antibiotics and blessedly went to school. Then she came home and it was like she’d never left. The three of us had our evening stretching out before us like something long and arduous an example of which I can’t currently think of.

So, anyway, we did homework and had dinner and I was getting happier and happier as bed time crept up and then it was time for them to get their jammies on and to make things even better my Bosom Friend called to chat so I shuffled them up stairs with promise of rewards for those who put on their pajamas with no fuss and enjoyed some actual adult interaction.

Soon enough, the phone call ended leaving me to get back to my motherly responsibilities so up the stairs I went to brush little teeth.

With Enzo’s head nestled in the crook of my right arm took to the cleaning of his teeth. As I finished my gaze shifted and I noticed a peculiarity at his hairline. “Enzo,” I said. “did you cut your hair?” My mind was racing through possibilities. Cutting is his favorite pastime he’ll sit at the table and snip away as long as his paper supply lasts. He’d spent a good portion of the afternoon doing this very thing but I’d made sure he only had access to the plastic scissors that hardly even cut paper so how would he have? Also, could I have gone that long without noticing? Even in my distracted brain fuzzy 3 days home alone with restless sick-but-not-sick-kids state?

Then he answered, “Zizza did it.” A completely calm, matter of fact statement. I called Ziz. “Tell me about your brother’s hair,” I directed her. “Oh, he did that,” she informed me just as cool and confident as Enzo’s conflicting report had been.
“But how?” I stammered. “What did he cut it with?” “your sewing scissors” she told me.

I had no guess as to which was lying though I tended to go with my original supposition that Enz had done the snipping himself based on his love of cutting things and the fact that he’s younger and less accustomed to the wrath that comes when you mess with my stuff.

I was too beat down at that point for any wrath though, and that’s probably a good thing. I was just worried about that clump of hair lying somewhere in the house waiting to be strewn about and become an awful mess. Either that or already strewn into the awful mess and just waiting to be discovered. I asked them both what had happened to the hair once it had been dis-joined from the boy’s head. Neither of them had an answer. I looked in all of the trash cans, I did a close scan of the carpet as the hair would blend right in with that to lie in wait for a scattering force. I couldn’t find it. I still haven’t found it. I’m working under the assumption that it was flushed because how else would a sizable chunk of hair vanish so effectively?

I was still looking when the Mr returned home and put an end to the “whose lying” portion of the conundrum.

We currently have a marble jar reward system going. When you’re obedient or thoughtful or whatnot you get a marble for your jar and when your jar is full, you are treated to an agreed upon reward.

Zizza was mere marbles away from her reward. She’d been working a long time for it and just a few more batches of dishes would make it hers.

“I guess we’ll just have to take away half the marbles from both jars.” Stated the Mr. “since we don’t know who’s lying there’s nothing else to do. Of course if the one who’s lying were to tell the truth, they would only have to lose a quarter of their marbles…” And that’s where Zizza burst into tears and came clean.

Then The Mr took Enz to the bathroom, got the clippers and finished the balding of him.

I’ve been encouraging Enz to wear a hat as often as possible. Oh, sure I realize a little cue ball head boy is not the worst thing in the world and of course he’s adorable hair or no hair. It’s just that I miss his hair.

3 Responses to The tale of the bald headed boy.