Last week I helped the kids make gifts for their pop. It’s the only holiday crafting I’ve done thus far. I was feeling pretty good about it and then I looked through my photos from last December and now I feel like a slacker. I used to make a lot of stuff. During the past six months? Not so much. But I did make these!

The Mr is a big Phineas and Ferb fan. It all started when we went to Disney land for Zizza’s fifth birthday and he received the pleasure of kicking it in the hotel room with Enzo and Moo while they napped. Well, Moo napped. Enz did not. So Zizza and I wandered around Disney Land doing a few bigger birthday girl things, Moo slept blissfully in the dark of the walk in closet and Enzo and the Mr watched a Phineas and Ferb marathon.
Did you know they don’t make Phineas and Ferb t-shirts in adult sizes? I guess maybe somebody does, but they don’t sell them at Target. So Enzo and I bought a kid’s shirt and also a mens shirt and we put the two together with the following result. 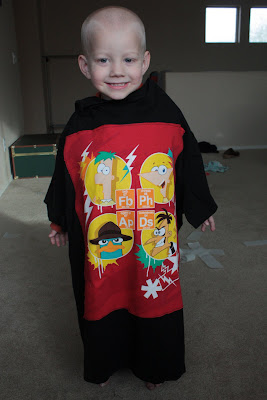 Enzo’s jobs were to supervise my cutting, pull the paper backing off the steam a seam, sit on my lap and help guide the shirt through the machine as I sewed and putting it in the box. He did a great job. (I shall address his fresh baldness in a separate post)

I didn’t have a suggestion ready for Zizza when it came time for her to select a gift. Actually I’d been planning on the shirt being from both kids. She had an idea though, so that settled that. She wanted to make a bag to hold all of The Mr’s ping pong paraphernalia. So we looked through the fabric, settled on gold fish and knocked it out. 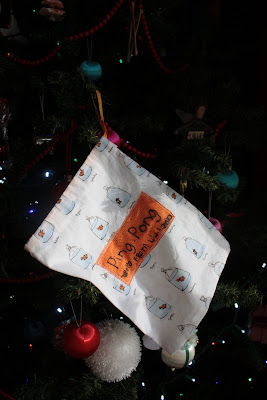 Her jobs were cutting, operating the machine pedal as well as helping to guide the fabric and writing the label. (we just used a sharpie cos we’re classy like that)
She did find that wielding sewing shears is trickier than she expected (more on that later) also, it’s really hard to write near the edge of a piece of fabric with a sharpie. When she was done she had the honor of being the first to put a gift under the tree. It was a proud day for Ziz.

Now I just have to make a whole bunch more stuff and we’ll be ready to go!