Guess what today was. 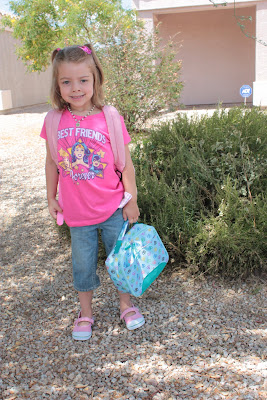 Suddenly structure has been introduced to our lives. I haven’t had a place I had to be at a certain time everyday in six years.
Sure, we have our daily routines but nobody’s going to be bustin’ my chops if we eat lunch at 1:00 instead of 12:30. There have been three years of getting her to preschool on time but that was only twice a week. Now Its up to me to fetch her buddy and deliver them to school on time Monday through Friday.
Luckily I don’t have to go for pick up too. How would I manage two time sensitive responsibilities everyday?
Anyway, it’s not about me, it’s about her right? So let’s go over her outfit.
I took her to Old Navy yesterday to pick out a first day outfit. I wanted to make something but we just got home from a month long vacation so, consumerism it was.
I was not thrilled with the idea of a character t-shirt but I’ve been trying to nurture within her, a love for Wonder Woman in the hopes of winning her cooperation in some Halloween amazonian awesomeness. In that sense, her t-shirt selection was a raging success. Then again, as of bed time tonight she was vacillating between Gypsy and Flower fairy. Both of which would be repeats. But that’s another story for another day.
The pants she chose solely for their awesome belt which you can’t see here.
We also got her lunch box from Old Navy. I had planned on making one to match her elephant back pack, which is seeing another year of use, but that plan hit a bit of a snaffoo. See, Zizza wasn’t interested in the elephant shaped lunch box I had planned. She wanted a rectangular one with a pocket and appliquéd elephant on the front and I wasn’t up for busting out a lined, piped, zippered, insulated thing like that yesterday afternoon. Just didn’t have it in me. Yes, the stuffed elephant with a zipper down it’s back an a compartment in it’s tummy for a snack really would be less work than a more traditional design. Sometimes life is crazy like that. 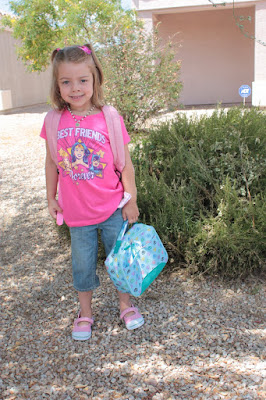 Now, were getting to the good part of her outfit. See the necklace? I spotted it about two years ago and thought it would be a perfect good luck present for a girl starting kindergarten. Lucky for me, it is still available.
It was waiting in the mail when we got home Sunday evening. I let her open it right away, she smiled then I asked her if she’d like to put it on. “No, thanks” she said and ran outside. I was rather deflated at the time, but she put it on the next morning and has been wearing it steadily since. Huzzah! 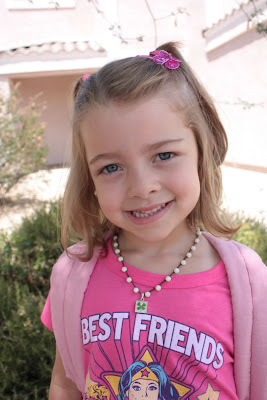 The hankie; Yeah, so sister’s got a bit of a nose picking problem. This morning I asked her if it would help to have a hankie that she could use instead of picking if the urge struck. She said it would, so we settled on a design and chose fabrics. Then we were nearly late because I couldn’t find my appliqué webbing in the black hole of the sewing room.

She reported at the end of the day that she’d neither picked her nose, nor made use of the hankie but she’d like to continue carrying one in case she got to feeling picky in the future.
I was happy to hear that hankie number one was appreciated but still clean and ready to go for tomorrow so I wouldn’t wind up either washing or sewing last minute hankies tomorrow morning. 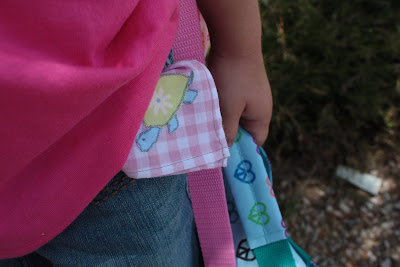 The two girls were not at all excited to be going to school, as you can see. 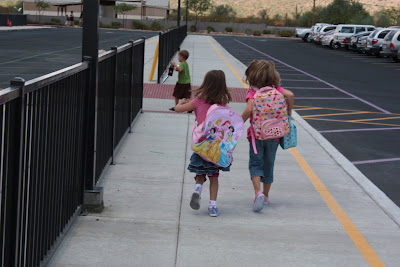 This here is what Ziz was running for. She’s been absolutely beside herself in anticipation of the seesaws. As soon as a spot opened up, she was on it.
She sat bewildered for a breath or two with nobody on the other side to teeter her totter, and then this curly headed boy jumped on and away they went. 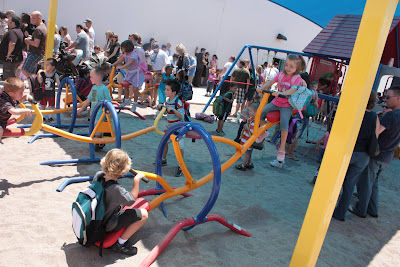 He was a good seesaw buddy too. Girlfriend was flying. 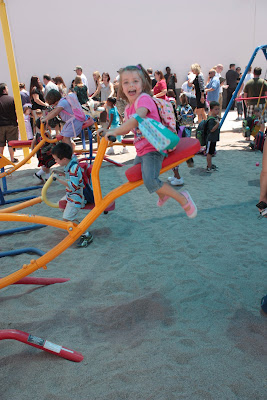 When it was time to go in, she hopped off and learned the importance of seesaw communication. Both parties were unharmed but quite surprised at the result of her sudden dismount.

She wandered into the classroom without a backward glance… 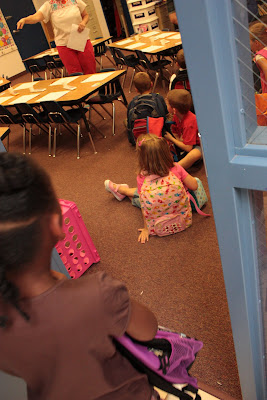 and a few hours later she was home. Happy and tired, just enough energy to tell me about her day and make a phone call. She managed to share a thing or two about school with the Mr. but she didn’t work up the gusto to return her grandma’s call until after dinner. 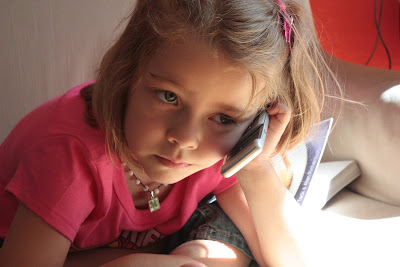 Enzo and I were busy while she was gone. We grocery shopped and then made up a special treat for her to come home to. She appreciated the gesture even if the peanut butter M&M brownies were a little on the goopey side. 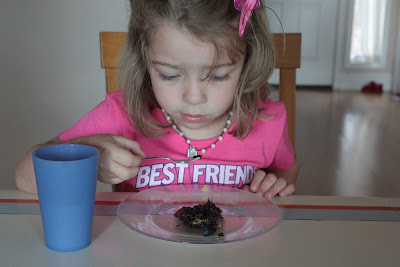 3 Responses to My life has changed