Wanna know what’s hard? Getting five kids who range in age from six years to nine months to sit still and allow you to document their wearing of adorable matching outfits.
See? Only four kids! 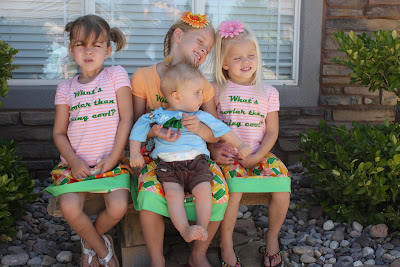 This one was having none of it. I had to chase him down and trap him against the wall on order to get this one blurry shot. Actually there were 2 blurry shots but I chose this one because in the other one you can see my hand holding him there. 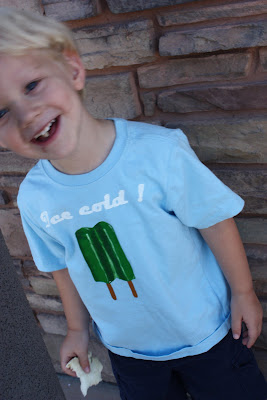 I’ve had this Popsicle print waiting since February 2009. I saw it the summer before, finally bought it and then couldn’t decide what to do with it. 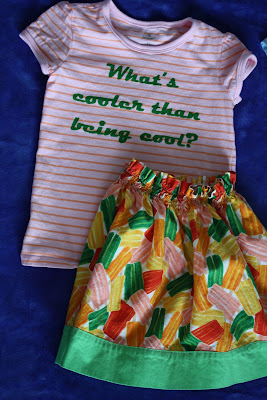 This year I had a plan. I was going to do the oliver+s birthday party dress with green trim. I got to thinking though, wouldn’t it be fun to get the boy in on the twin-pop clothing action too? The fabric with it’s pink pops was just a little too girly to use for Enzo so I had to come up with some other popsicle for him to wear. 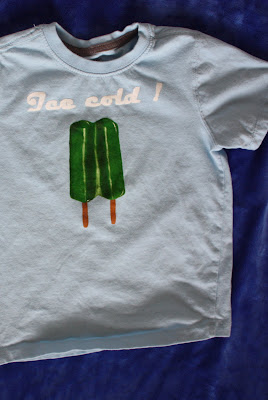 After deciding on a twin-pop stenciled t-shirt I started mulling over ideas for a message to go with the image and Hey-ya! I got an idea!
I liked the idea so well that I thought of my friend Blanche who has a healthy appreciation for a message T and who had a baby a while back that I had yet to make anything for. Her kids would be needing some popsicle clothes too. There was no way around it.

So, I scrapped the dress idea in favor of the brother-sister matchy T-shirt plan and used the fabric that started it all for skirts to compliment the sister shirts.

Now I should mention, when I tried painting the popsicles on my own they looked nothing near that good. Not even like popsicles really. Lucky for me I have a talented friend who rescued my failing endeavor. She did a good job, huh?

2 Responses to Keep it cool