Back in the day my roomies and I were way into the Golden Girls. We watched it every day or more, and we each had a Golden Persona.
I was Rose, Annie was Dorothy (to her dismay) and Kristi was Blanche. There were only the three of us that semester so we didn’t have a Sophia.
In addition to Golden Girls, there’s a thing called a Golden Birthday. When the age you’re turning matches your birth-date that is your golden birthday (also called a magic birthday) I had mine when I was six. At the time I didn’t know it was any more Golden or magical than any other birthday so I missed out on the whole institution.

Bummer.
This year Zizza’s bestie had her golden birthday. She knew it was a special one and had a golden party planned for herself months in advance. She and Ziz discussed the Golden state of this birthday regularly during all of those months and Zizza decided the best gift of all would be a golden swimsuit, so I began searching the internets for gold swimsuit lycra. I found a lot of lovely gold dance wear lycras, but all of them noted that they were, under no circumstances, suitable for use as swimwear.
Finally I found it; swimmable golden lycra. In my excitement at cornering my quarry I called Ziz to the computer to see the lovely gold I was ordering. Her response was to point to the yellow next to it and state she’d rather use that.
After some discussion, reminders about the concept of the golden suit for the golden birthday and so on, she still wanted to give yellow and since she was the official giver, that is what we did.
I made the gift suit first, so Bestie could wear it to her Golden pool party and be the special Golden birthday girl, then I made a matching suit for Zizza during the following week because if there’s anything I know it’s the joy of having twinner clothes with your friends. (Blanche and I used to dress alike all the time)
Zizza had lots of ideas on how the suits should look, but in the end she liked my original a-symmetrical ruffled swim dress idea the most. 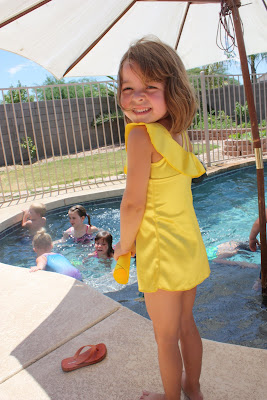 The skirt floats up and gets in the way once it hits the water. 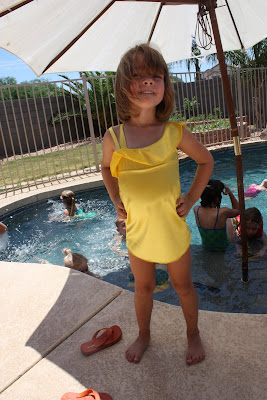 On the pool deck though, it’s golden. Even though it’s yellow. 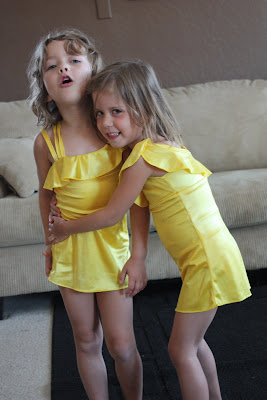 And the girls know the joy of matching outfits.