During this past year Zizza has been growing like a weed.
In the past her dresses have almost always lasted a season and a half to two seasons. Things she wore one summer would fit her for at least half of the following summer and then the replacement would fit for the other half of that summer and the whole of the following summer.
You get the idea.
Until this year.
This year she’s out grown even the dresses from the winter we’ve only just got through.
So, for the first time ever, I made her a dress because she actually needed it. Without this new dress she would have nothing appropriate to wear to church. We’ve been getting by with her wearing play dresses and Sunday shoes or by turning a blind eye to the shortness of her winter dresses.
Thank goodness that won’t be necessary anymore. 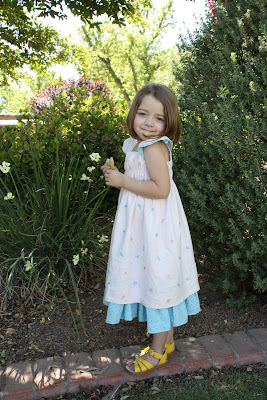 I used the same fabric combination as I did for this bag. I used every little scrap I had plus some white muslin for lining. 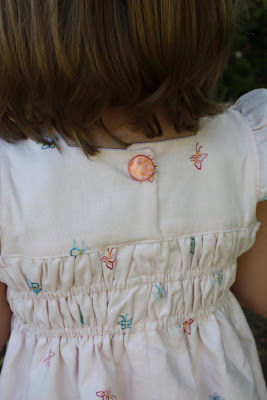 My original plan was to use elastic thread shirring below the yoke but I decided elastic thread wouldn’t be strong enough to gather the weight and volume of the skirt so I made casings and threaded them with quarter inch elastic instead. 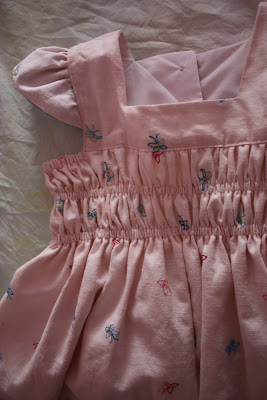 My favorite thing about this dress (besides the end result of having a child appropriately dressed for church) is how I told her I was making her a dress that was a surprise so she spent the hours while I was in the sewing room shielding her eyes as she skittered past the door because she didn’t want to spoil it.
She also insisted on wearing a blindfold for fittings. I told her a simple closing of the eyes would suffice but she didn’t want to take any chances and wouldn’t come in without the blindfold.
In the end all the hype worked and she loves it even though I made it just how I wanted without even consulting her.
I wonder how long that trick will continue to work.

8 Responses to At least she’s a pretty weed.