I began yesterday begging favors in the name of “Mother’s day eve” and Zizza took that and ran with it. She is very good at pampering when she takes a mind to do it.

The Mr let Ziz and Enz each chose a bouquet of flowers for me.
They both selected bunches of 2 dozen red roses. Neither could be persuaded to vary in his-her choice, and each insisted upon selecting their own bunch. Thus it came to be that four dozen red roses adorn my table. 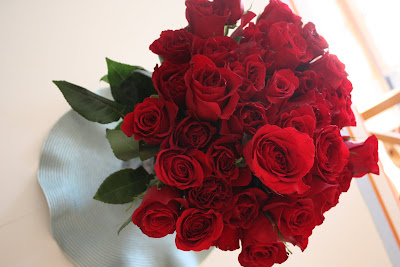 Last night I prepared a little mother’s day gift for myself. I bathed each and every child with the precious as gold Oatmeal scented Gerber Grins and Giggles baby wash I procured via e-bay after writing this post.( By the way, I ended up getting a much better deal than the $9.95 a bottle I mentioned there.)
Then after they were all clean I took it one step further and slathered the three of them with the even more precious than gold lotion. I’ve only got one remaining bottle of that so it’s for special occasions only.
Oh, my my was it worth it! I sneaked into the bedrooms after they were all sleeping and sniffed and sniffed those heavenly smelling babies.
This morning I sniffed them each some more and then I sat down to a breakfast of Whole Grain Waffles . Yum
I made 2 requests for gifts. The first was to be given a copy of “Xenocide” (I’ve been reading Ender of late) and allowed to read it in peace. The second was asked of Zizza specifically. I asked her to let me do her hair however I liked and for her to hold still while I did it.
Both of my requests were granted. Lovely
At church the children in the congregation all stood and sang what I believe to be the worst and also most sung Mother’s Day song in the church. It’s so minor and dreary and when you add in the monotone droning of less enthusiastic children it becomes even more so.
I can’t figure out why people keep singing it. I would much prefer “Mother Dear I love you so” or, even better, “I often Go Walking” which was alway my mama’s favorite (right Mama?) and accordingly became mine as well. If I’m ever in charge of picking the song rest assured it will not be “Mother I love you”
Any who, primary songs aside, for the last hour of church there was a little social arranged for all of the women with cheesecake and every thing. It was utterly delightful. Especially since I’d been shot through with spasms of worry all day fearing that I’d missed a message somewhere and was going to be expected to stand up and teach the lesson even though today was the second Sunday of the month and I teach on the third. I will be ready to teach next week, today I was not.
Back at home The Mr. made a delicious Quiche while I sat and read.
It was a good good day.
How was yours?