Back in January there was a big event chez Uniquety that I failed to mention.
We took the training wheels off Zizza’s bike. The plan was to take the pedals off too, but The Mr, it turned out, didn’t have the right kind of tool for that. Thus we found ourselves with a five year old girl and a training wheel free bike.
I tried to coax her to just ignore the pedals while she worked on balance but she was having none of that. She worked and struggled trying to get her feet up to the pedals. At the end of the afternoon, she could step off the ground for half a rotation before stomping down to catch herself.
We went to ride bikes with her cousins a few days later. My sister in law and I were holding babies and chatting on the way-side while the big kids wheeled around on their various vehicles.
Zizza was out there, trying and trying. I wasn’t paying much attention, just shouting the occasional word of encouragement.
And then she went riding past me.
It took a minute to register that it was her.

How could it be?
This was only the second day she’d tried riding and no one had even run along behind her holding the seat and promising through their lying teeth not to let go!
Her Uncle (Who was tossing a football with his boy in the midst of the vehicular glory of children) had simply offered her a push and away she went.
Not having realized what an important day that would turn out to be, I hadn’t brought my camera along so she and I stole outside during nap time the next day to document her new skill. 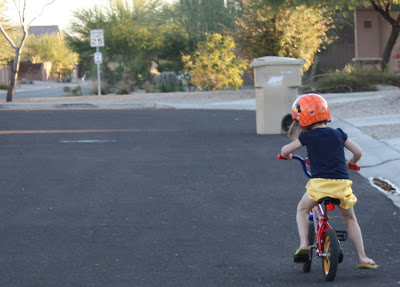 She’s wearing a cheap satin skirt from a disney dress-up assortment. It really wasn’t cut generously enough for bike riding and accordingly now resides in the trash the fabric having completely unraveled at the the over taxed seam. 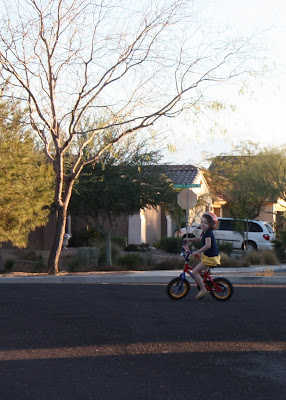 Soon we found that her little twelve inch bike, though ideal for learning, couldn’t give her the speed she craved now that she was up and going. We tried going out for a family run, her on her bike, and the other two in the jogger but twelve inch wheels couldn’t ride fast enough to keep ahead of me, and I am not a fast runner.
I found an ideal bike on craigslist. Sixteen inches, pink and purple polk-a-dot banana seat! But alas, It was the week before we set out for the wedding and I couldn’t spare the time to go out and fetch it.
I held out hope that another such deal would come along. I scoured craigslist regularly. For months I didn’t find anything smaller than 20 inches, or cheaper than a few hundred with the desired banana seat.

And then, there it was.
“Early sixties small (14 inches)banana seat bike. Make me an offer” the add said. No photo, just that.
After a steady flow of email over the next few hours, I made it to the house just in time to snatch up the bike before the owners had to leave for a birthday party.
It turned out to be a sixteen inch schwinn stingray. I couldn’t be happier, and neither could she.
It sat sad and lonely in the garage for a few weeks, 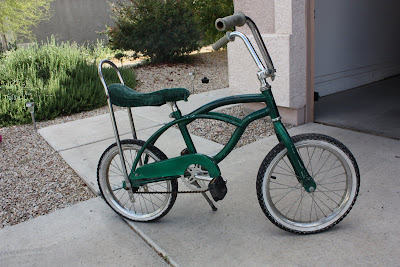 until the new white wall tires came on special order. 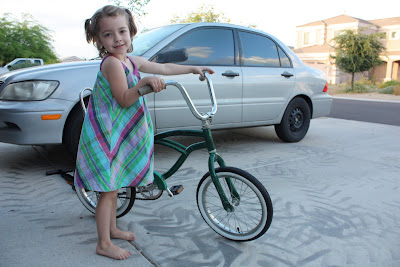 There was some anxiety getting started. Going from a bike you’re big for to a bike big for you is quite an adjustment. 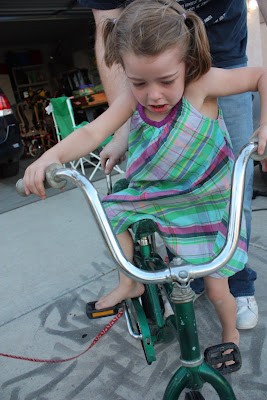 But she knocked it out. (Now looking at the photos I question myself for sending her off to ride that big bike for the first time sans and kind of safety gear…or shoes) 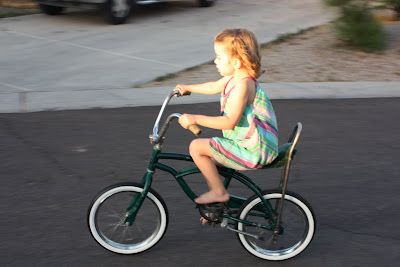 She’s decided she wants it painted light blue. I’ll reupholster the seat and we’ll see about a basket for the front. It will be awesome.

Meanwhile, the training wheels went back on the rocket bike. 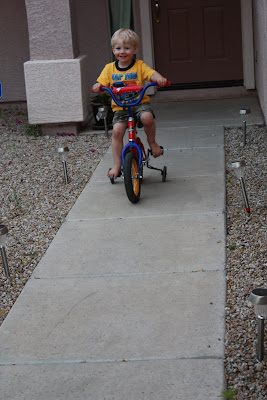 He’s pleased as punch over his “brand new” bike. Even if he does ride it with the handle bars turned around backward the majority of the time. (I’ve yet to get a photo of the oddity)
Now if only I had a bike, we’d all be set.

2 Responses to I want to ride