A dress for a dear little niece who will be blessed on Sunday. 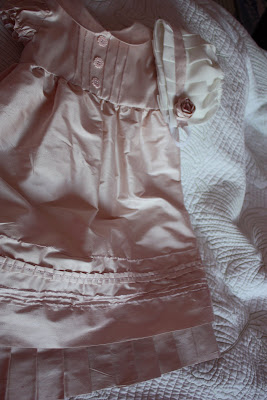 The only things her mother and I talked about were fabric, (this pink dupioni I bought for a wedding but it wasn’t quite the right shade so it was shuffled into the stash to await it’s day of glory) and ruffles, like the ones on Zizza’s winter dress. The rest of the design was up to me. 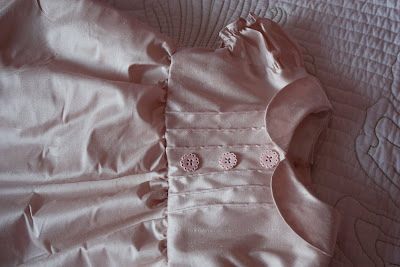 That really is my favorite way to work. It’s so much better to have creative freedom. I sometimes get a bit resentful when sewing the designs of others. I quell it as best I can, but I’m much happier when my own hand rests at the design helm.
I had some trouble with this one though. Initially I designed something completely different. It would be a lovely dress, but it really needed more drape and flow in the fabric to come out right. This is a nice thin dupioni, crisp, almost like paper. 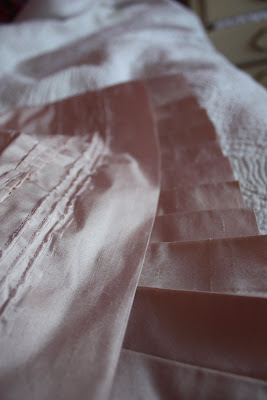 So the ruffles morphed into pleats and the rest of the dress followed until the design reached a place that both suited the fabric and made me happy. 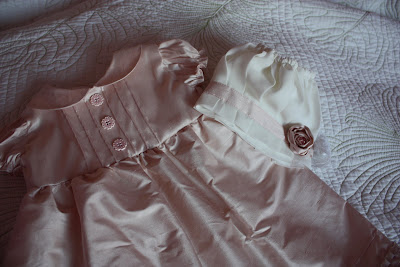 Once the dress was done it was time to consider the bonnet. 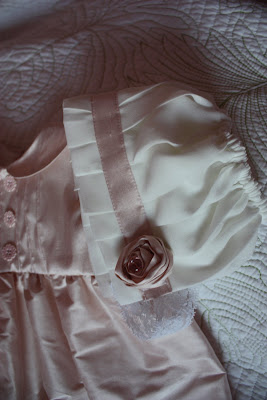 I initially planned to use the dupioni for the bonnet but aside from being too matchy matchy, I decided the stiffness would be problematic for the bonnet design I had in mind.
Out came the extra bit of silk chiffon I had tucked away from Azure’s Dress and the bonnet came into being. 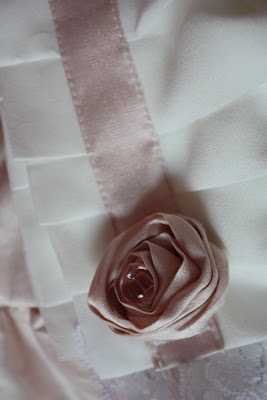 I spent weeks sifting through ideas for this dress. It took so long to decide what exactly to do that I didn’t end up starting in until the day of my deadline.
As I was thinking and grew more comfortable and confident in my design I came to realize that this was becoming very much like the white linen gown that I imagined for my own little Moo.
There’s a picture in my head of us on the steps on the Mesa temple, holding hands.
The pleated underskirt hits just above her ankles and her hair hangs just to her shoulders in perfectly chaotic ringlets.
I suppose I’m letting go of that dream a little bit. Enough to let the design slip through for the benefit of someone who will get the chance to wear it.

8 Responses to For Izzy