The party we had Friday was not for Enz alone. His friend has a birthday a month after his, so we (his friend’s mother and I)selected a date midway between the two and planned a party for them to share. 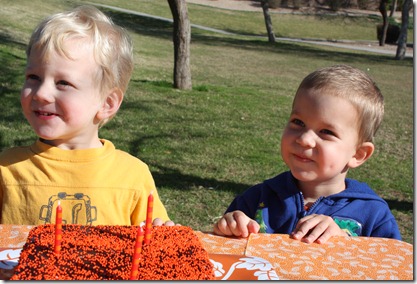 We ruminated a bit about a theme for the party because where Enzo loves trucks and tools and such, his friend loves dragons and tigers and things that growl. 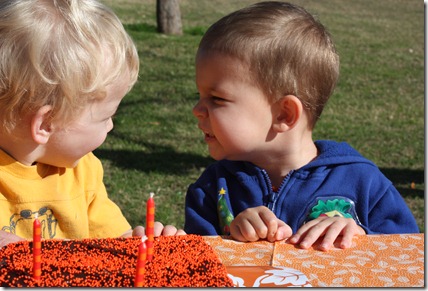 See what I mean? The kid loves growling.

Enz enjoys a good growl now and then, and his friend likes trucks and things well enough, but neither theme really embodied both boys. There is one thing though, that they love equally and thoroughly.

So we planned the party around the color orange using whatever orange stuff we could find in our houses and at the dollar store. But that’s not really what this post is about.

Remember I mentioned the growling? Who do you think I thought of when I ran across this tutorial?

Why growly growling boy of course! So I dug into my stashed fleece and made him a pair. 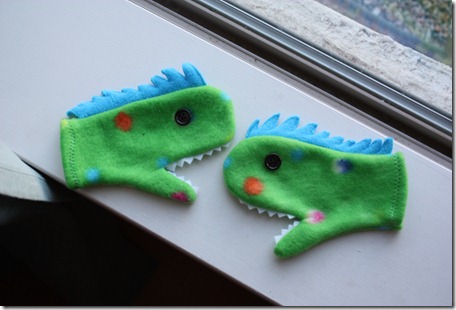 I was busy cutting the cake when the presents were opened, but after opening them,  The growler came over and showed me how they fit.

I’m going to wait and find out if either of his hands were injured in a dino-fight before I confirm whether or not that story is true.

Dino mittens are a fun quick project and the tutorial is clear and easy to follow.  I recommend it.  So does Enzo.  In fact, he’s already selected fabric and submitted a request for a pair of his own.

Due to the climate I live in, the mittens I make will likely never be used as anything but puppets but I’m ok with that. Puppets are a good time.

2 Responses to Orange and Dinos