He was going to Utah State in Logan and I was going to Southern Utah University in Cedar City. That’s a good five hour drive. I was headed home for the weekend. He was going to be in the Salt Lake area to attend a few missionary farewells on Sunday, so I offered to go with him. I was wearing a straight, just below the knee length black skirt, a charcoal gray ballerina wraparound sweater with a pink shirt underneath, black fishnet tights and these shoes 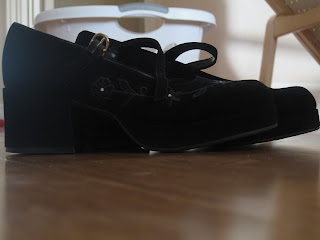 My hair was platinum blonde, short, sassy and interspersed with locks of pink to match my shirt. My lipstick was also that shade. Probably, my underwear matched too because that’s just how I rolled back in the day.

He was wearing a white dress shirt, yellow tie, black v-neck sweater, black slacks and black wingtip Skechers. He asked me to verify that his socks were black not navy. He’s always had trouble with that. I finally threw out the navy socks so he wouldn’t have to worry.

My brothers mocked him for it later.

He loves the chops though, he grows them every chance he gets. That’s enough about our wardrobe choices that day, I’ll get on with the point of this story.

He gave me a valentine while we were driving about. It was a mix CD.  A love mix CD, and a good one. I took it back to Cedar with me, and my roomie Annie and I played it on repeat in our room fairly constantly for the remainder of the semester.

From that time forth The Mr has carried the responsibility for my musical preferences and listening pleasure. I’ve always been a bit of a mooch when it comes to music choices. I listened to the radio as a teenager and had likes and dislikes but I would never even consider spending $15.00 of good shoe buying money on a CD. I stuck with the radio at home, enjoyed the CD’s of friends when I was with them and bought myself pair after pair of brightly colored shoes (the pair count hovered right around 75 when I graduated from high school)

Then The Mr. came into my life. He is a music guy. His ears are always open for good music. He scribbles lyrics down on bits of paper so he can hunt down songs he hears while he’s out and about, and he has excellent taste. I don’t listen to the radio anymore. For the past eight years I have listened almost exclusively to mixes compiled my savvy husband.

That’s not to say I don’t have opinions or preferences of my own. During the first year of our marriage he went on a Sondheim bent ignited by my love of the same. Every so often I hear a song that he maybe hasn’t noticed and request that he add it to our family soundtrack. I saw Norah Jones sing about her friend the letter Y on Sesame Street and soon she made her way into the mix.

I decided I should learn to answer that question for myself. I am fine with his being in charge of the musical climate of our union, but I should at least know what that is. To help me with this, I am introducing a new blog feature. I related in this harangue of a post how I feel about blog play lists. (By the way, if you have a blog play list I don’t actually hate you or your blog, but I do turn off your play list as soon as I land on your page, before it has a chance to load)

This new feature will be a monthly guest post by my Mr introducing the music we’ve been grooving to of late and providing a play list (which will not turn on automatically) for those interested. I’m hoping reading his posts will help me to learn the names of the songs and musicians I enjoy so I’ll be able to identify them in terms more concrete than “that one song by that one dude.”

By the way, this month’s play list is a facsimile of the Valentine CD from so many years ago. There’s a song or two that he couldn’t track down the same version of, but all in all, this is it.

Addendum December 26, 2012
oh, dear looks like the playlist didn’t stand the test of time. Too bad cause it really was a good one. Maybe someday we’ll re-create it (probably not)