It’s delightful stuff. It really is. Unless you’re my husband or similar.
But did you know that there is a better way to eat it than the conventional method of sticking hunks of it directly into your mouth?
There is.
Now, if you come around here often, you might suspect that I’m going to suggest dipping it in peanut butter.
You also might be gagging at the thought.
Fear not, there is no peanut butter involved in what I’m about to tell you. Even I have limits.
The best thing to do with peppermint bark is submerge it in a cup of thick rich hot chocolate. 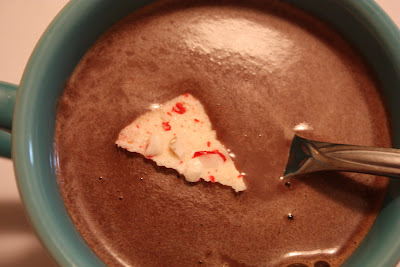 It’s way better than just stirring with a candy cane. That white chocolate melts and adds a yummy mellow richness to the cocoa which is, you guessed it, yummy. By the way, there was another chunk, twice that size already at the bottom of that cup.

Now I have to tell you something else.
I don’t believe in hot chocolate mix.
I used to believe in it. I’ve still got a number ten can of it in my pantry, but I don’t use it anymore. (huh, maybe I should throw that out?)
A few years ago, my mother in law was out of cocoa packets when the grand-kids came. She, being the resourceful person that she is, whipped up some cocoa using chocolate chips and milk.
I have never gone back.
I’ve worked and slaved and drunk countless cups of cocoa to come up with the ideal method for putting my mother in law’s discovery into action and I’m going to share that with you now.

Ingredients
1 bag milk chocolate chips (I like Ghirardelli)
1 Gallon milk (the higher the fat content the yummier, I make it with skim all the time though, and it’s still good)
a splash of vanilla

Pour the milk into a big pot and heat it to drinking temperature. Watch it close, you don’t want it to get too hot. Every moment you spend waiting for your cocoa to cool is a moment wasted.
Meanwhile in a small sauce pan, over medium heat, melt the chocolate chips.
When your milk is warm and your chips are liquid, whisk the chocolate into the milk until completely combined. Add vanilla to taste and you’re good to go.

I’ve never come up with an ideal ratio for smaller quantities, I just guess at it every time. That’s most of the time because I don’t often have cause to make a whole gallon of cocoa. Believe it or not you can add too much chocolate.
Another thing, the other day I made some and let it sit in a thermos for a few hours until drinking time and it came out tasting a bit stewed. You know the cooked milk taste of warm pudding? It was kind of like that.
I happen to like warm pudding so it worked for me, but if you don’t now you know how to avoid it.