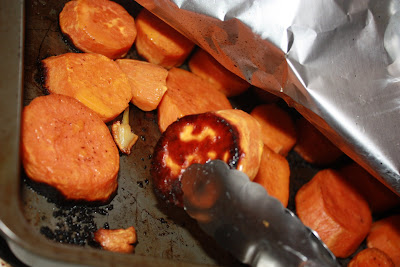 I cooked last night. It seems like it’s been ages since I actually cooked rather than just fixing dinner.
I was cookin’ up some sweet potatoes for my Zizza. She’s been asking for them. I was trying to keep it super simple, because that’s how she likes it, but still interesting enough for The Mr. and me.
So I peeled them, tossed them with olive oil, plenty of kosher salt and black pepper and a few crushed garlic cloves. Then I put a glob of butter on each slice because butter=guud.
I covered the pan with foil and popped it on the grill on low heat. I used the grill because it was already hot whereas the oven was not.
I left them on for about 15 minutes and when I checked I saw the char on the bottom and thought all was lost. I turned off the heat under the pan so they were just getting indirect heat from the rest of the grill to cook them through.
Fifteen minutes later they were fork tender so I pulled them off and took them inside. I’d been planning to cut off the charred bottoms and pretend nothing had ever happened, but when I turned one over and looked at it, I saw that is wasn’t actually charred. So I tried it.
Genius.
Seriously, so delicious. Caramelized to perfection.
Maybe it doesn’t count as my own genius since I didn’t plan it to go that way but I’m going to claim it just the same.
You can’t stop me.

4 Responses to I am a genius