Halloween.
I’ll tell you about it real quick before I forget for good.
I made eyeballs a la Family fun magazine. It was my best candy dipping experience to date. I quite enjoyed these. 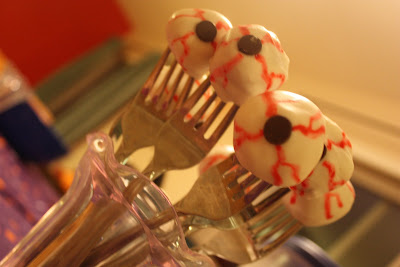 For months Enzo and I talked about his costume. he wanted to be Cookie Monster. He had his tag line of “mmmmm cookies” down pat and I had grand plans of ping pong ball goggly eyes and the like.
Then a few things happened to impede our plans.
First, I couldn’t find any blue fur. I was thinking about dyeing it myself when Cookie monster costume impediment number two came along.
Enzo decided he’d rather be Bob the builder.
And so he was. I whipped up a quick (and I do mean quick) plaid shirt and he wore the one pair of overalls in the house. They are sized twelve months, hence the shortness and tightness.
We borrowed the hard hat and tool belt from some cousins who went through a Grandparent fed Bob phase a few years back.
If you don’t count the hour or so it took to run to Good Will last minute on an ill fated search for larger overalls this costume was made in under an hour. Not too bad considering how pleased Enz was with the results. 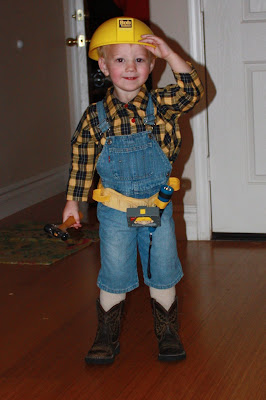 Zizza decided that after talking about the possibility for three years, she’d be Lizzie the elephant. I added a skirt, a bandanna and some jewelry to the elephant I made last year, and she was all set.
There’s a problem with costumes that are too bulky to wear in transit. That problem is photographs.
I didn’t ever get her all suited up for a picture while we were at home. She looked adorable at her preschool party, but I dressed her once we got there and left her to enjoy the event without taking any photos.
Then came the big trunk or treat at the church. We left the head stabilization mechanism (a stocking cap with a piece if duct tape on top to stick it to the inside of the head) at home so she had to hold onto it to keep it from slipping she was also rather preoccupied with her friends. This is the best photo of Zizza as Lizzie the elephant we managed to get. 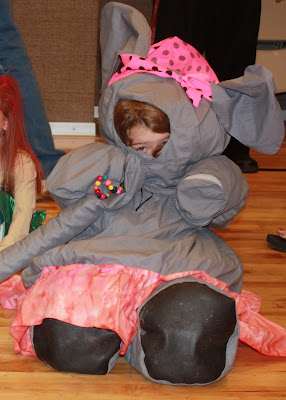 This little one wore the gypsy costume I made for Zizza when she was that size. I’d planned on making a curly maned lion costume for her but since I was uncertain about whether or not she’d be here to wear it I decided just to recycle the gypsy. I didn’t want to be left babyless and crying into a hood of golden grosgrain ringlets.
She makes a cute gypsy though, don’t you think? 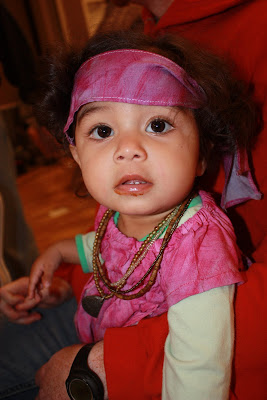 On Halloween night the Mr and I had a church meeting to attend. We took The New One along with us while Zizza and Enzo trick or treated with their cousins.
After wrestling with the elephant head the night before, Zizza decided she’d take it easy and wear the Minnie Mouse dress I made for her to wear to Disneyland on her birthday and haven’t blogged about yet. I think that was the best decision she could have made. The elephant is super cool, but it’s also cumbersome. 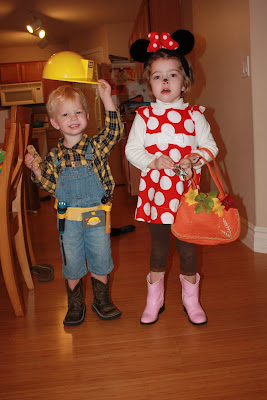 Another thing I didn’t get a picture of was myself in my rag doll costume. I do however, have a photo of the completed wig. Here you go. 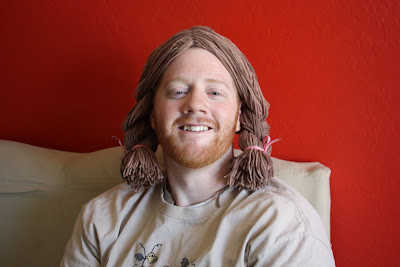 4 Responses to You know what I nearly forgot about?