I was trying to keep things relatively simple on the whole as I dressed my family for our recent portraits. I made my dress for pictures and that was a bigish project so sewing for everyone else had to be kept to a minimum.
Lucky for me Old Navy had a jumper in just the style I was wanting for The New One. It was only wanting a little embellishment which I could easily provide. That embellishment being this little birdy. 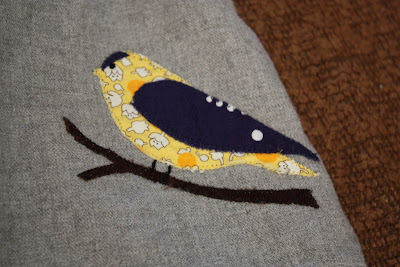 I had planned on making the whole of the bird yellow, but I had some blue scraps laying by as I worked on it and before I knew it I had a yellow bird with blue wings.
I’m really happy with the bird in and of it’s self. I’m happy with the jumper as a whole.
I’m not happy about the shirt I had under it. 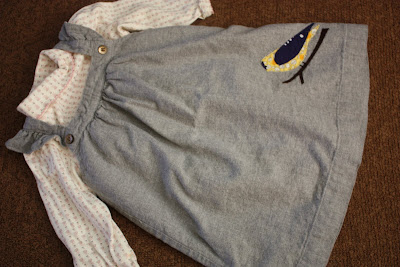 I did my Old Navy shopping on-line. On my computer screen the pattern on the turtle neck looked less pink and more subtle. I thought it would lend some general texture to the ensemble.
When I put the whole thing together it seemed like all I could see were those darn little pink hearts that in no way compliment my yellow and blue bird. If I’d stuck with plain yellow it would have been fine, but I had to go and throw that blue in there. At that point though, we were on our way out the door so what was I to do?
I wished to high heaven that I had a navy turtle neck in the bin of outgrowns that could swoop in and save the day. I didn’t though so I just had to pretend to love the outfit.
I’m going to buy a navy turtle neck before I put the jumper on her again.

3 Responses to Dressing The New One