I planned from the conception of this family portrait scheme to dress Enz in his current Sunday Best. Here he is in the ensemble at the wedding we attended in June. 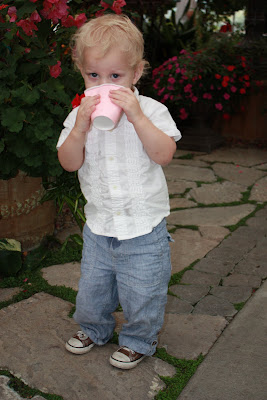 As portrait day approached however, I began to suspect that he would look a good deal summery-er than the rest of us in his linen pants and breezy short sleeved shirt.
A dig in the box of out grown and off season clothes solved the problem by way of a long sleeved, brown shirt of Zizza’s. We turned that baby inside out to hide the girly emblem on the front, layered it under his white shirt and he was set to go.
I adore the final look. Can’t wait to show you.