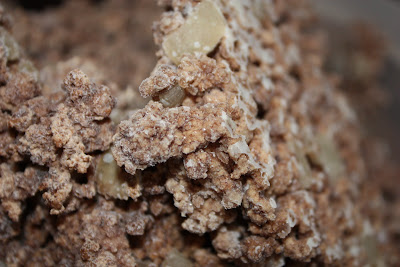 What’s that?
Ground beef, browned and frozen solid on account of The New One’s birthday is Saturday and we’re serving sloppy joes at her party.
This afternoon I brought the the stuff in from the freezer and crumbled the sheet pan shaped expanses of meat into alternate containers to store until I’m ready to make the joe sauce on Saturday.
Upstairs in the sewing room the party preparations take a more attractive form. I’ve got table cloths to hem. 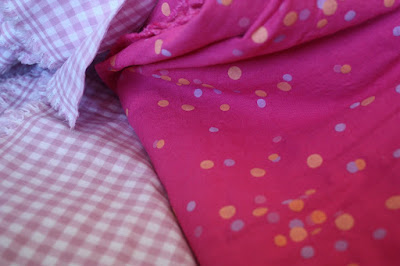 I baked the first layer of the cake today too. Sadly, I didn’t toothpick test it when I took it out of the oven. As it cooled and the middle sunk lower and lower, my regret grew and and grew.
When It was entirely cool, I decided to take steps to see just how bad the damage was and save it if possible.
First, I cut off the puffed edges of the cake so the top was nice and even. It was looking pretty good at this point. When I inverted it though, the doughy center stayed in the pan.
Drat.
The last thing I need is an unusable but delicious cake sitting around asking me to eat it. So here’s what I did;
I got a spoon and scraped out what was left of the gooey center (yeah, I don’t know what I was thinking taking it out of the oven. I guess I wasn’t. There’s the problem) then I took the scraps of deliciousness I’d trimmed off the top and filled in the hole.
That patched up cake is in the freezer hoping I’ll deem it worthy to serve as a layer in the finished birthday cake.
I guess that’s one of those secrets that’s never supposed to leave the kitchen, but it’s out now.
What do you think, should I use the cake?