Ok, I’m about to tell you something awesome.
Do you read The Pioneer Woman? You know how she always has dreamy giveaways but since approximately forty-three gajillion people enter every one you never think you have any sort of chance at winning?
For a while I entered every time anyway. Even if the prize wasn’t something I was interested in winning. (like a kitchenaid mixer. They’re fantastic, it’s true, but that’s why I already have one) Eventually I quit entering for things I didn’t want and then I even quit entering for stuff I did want because thinking about my forty-three gajillion to one chances of winning was too discouraging.
Finally I reached a healthy place where if she was giving away something I’d be thrilled to win, and If I had something worth saying as a comment, I would enter.
So a while back, Ree hosted a giveaway for a $300 shopping spree at Blue Q. To enter, you wee to leave a comment stating the last thing you bought just for yourself because you’re worth it. I had submitted the order for these shoes literally minutes before reading the giveaway post so I entered.
And I won.
That’s me, Eva commenter 13,445.
I saw my name there, and I gasped. Then I said to the Mr. “I think I just won a Pioneer Woman Giveaway!” then I searched through all of the comments to make sure I really was number 13,445. When I found that it was indeed me, I looked up with shinning eyes and said “It’s like I’m famous!”
I have corresponded with Ree Drummond, The Pioneer Woman. How cool is that?
Anyway, $300 goes a long way at Blue Q. I pretty much went through the entire site and got one or two of everything.
It was fabulous! Here is all the stuff I got. 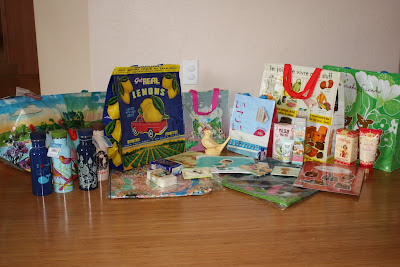 Somethings I ordered for mine own self, some I planned as gifts. I’ve even given some away already. I also planned to give a little something away here.
To enter, tell me how crazy jealous you are that I won.
Ok, not really.
Just leave a comment and I’ll pick a winner after a while.