You’ve all bee waiting for this, I know. Well, the time has arrived friends. Without further ado I give you my run down of The 2009 Wasatch Back 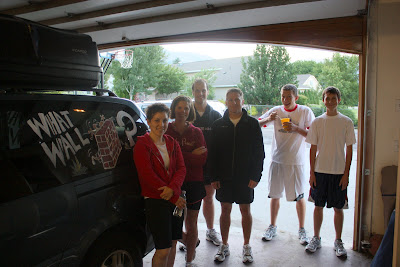 Here we are, the van one crowd ready to head out. That’s the only picture I’ve got that includes me. I have a few awkward mid-run shots of my teammates, but I don’t know how well they’d like it if I shared those, and the pictures don’t add much to my story any way, so lets just stick with the one team shot, and move on. Shall we?
Yes, lets! 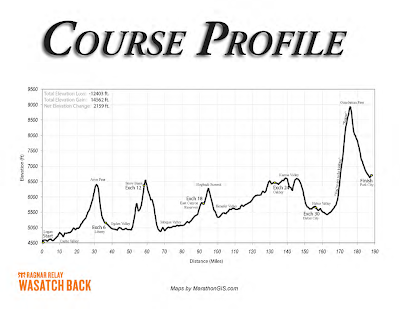 See that first big spike on the Course Profile? Right there between 20 and 30 miles. That was my first leg.
Here’s a graph of just that leg, It’s not quite so intimidating to look at in this format, but I’ve got to tell you I was still terrified.

All of my training was for this run. I figured as long as I got through this one, the rest would be cake. I was nervous, I mean really nervous. Since the only time I had to train was after my kids were sleeping, I had to stick close to home. We’re talking no more than a mile from my house a any point during training runs. There was a lot of looping involved, running up and down every street in my neighborhood. It’s an ok system for getting distance in, but my hood’s flat as flat folks. I never did find any hills to train on so I was worried.
I started out really strong. I found my pace early, and ran steady, no problem. I was climbing, but there were some down hill stretches now and then to even things out, and I was feeling good.
My team met me at the half way point, and I didn’t have the good sense to turn down the water they kept putting in my hands. I had water with me, so I was pretty well hydrated already. I only stopped at the van because I wanted Cocoa Butter for my lips but when the cold water was there in my hand I drank it. I didn’t drink alot but it was enough to regret when I started running again. I was uncomfortable for probably half a mile or so until my system absorbed the extra liquid. Then I was back on track.
The team stopped again, I think it was about two miles out from the exchange. I was running fine, on target with my projected pace, according to Neal, the teammate who was keeping track of such things. It was during those last two miles that I fell 15 minutes behind my projected time.
The real climb was starting, I was feeling strong having discovered the exhilaration that comes with besting a tough hill, but the road was complete crap. Big lose rocks that turned under my feet. I was wasting a ridiculous amount of energy trying to run without falling. I should have given in to the walk sooner, but I kept thinking the rocks would clear out so I kept running. Finally I realized how close I was to injuring myself and walked. Once the rocks cleared out I should’ve been able to run again but the road was narrow, and being that close to the exchange meant the traffic had picked up, so I spent a lot of time dodging cars. By the time the road was clear enough to actually run again I was so beat from the rocks, and the not getting smashed by any vans, not to mention that the climb had been relentless through all of that, I only just managed to run the last quarter mile. It was the shame I would have felt walking in view of the exchange that got me running again. And so, my 7.4 mile “very hard” run was over. I was happy with my performance and ready to relax and enjoy the rest. Compared to what I’d just done I figured I could pretty much sleep though my next two legs.

My second leg was 4.2 miles and categorized as “moderate.” Here’s the graph of this one.

I ran this some time around 9:00 pm. It was just dark when I started which was perfect. I started a little fast. After a bit I decided I’d better pull back to keep from burning out early and that was a good move. It was a really great run. I think it helped that it was right around the same time of night and the same distance as an average training run. There were some hills, which as I’ve already stated, aren’t part of my routine but it was a nice comfortable run and I was happy with it.
I was the second to last runner in our van so once we picked up our last runner we drove ahead to exchange 24 to sleep until we were up again. I laid my sleeping bag out on the lawn, crawled in and after 15 minutes or so to warm up and relax I was out. My teammates were kept up by the noise of the race going on around us, but I grew up in a 12 person household, if there’s one thing I can do, it’s sleep through noise. It’s a skill of mine. I even have it listed on my resume.
I got up a few hours later feeling fantastic and ready to run. One of the runners from our other van was having knee troubles and was afraid she wouldn’t be able to finish her up coming 6 mile leg. “No problem,” I said. I’d just woken up from some seriously good sleep and felt like I could run all day. “Get it started, and I’ll finish it if you can’t” My last run was 2.5 miles and ranked as “easy.” In the state of mind I was in, that didn’t seem like enough. I was almost hoping to be able to do more. Except for how that would mean my friend was hurt, I didn’t want that.(Love you Katie!) Here’s the graph of that leg.

I started running. I had planned to up my speed a bit since it was a short run on a solid surface with no hills and plenty of room to avoid oncoming traffic. I thought maybe I could make up a little bit of time. Not a lot of time, I am not a fast runner, but a little.
Then I started running.
Suddenly my body remembered the previous 24 hours. I was dead tired and I had to drag my self those 2.5 miles of flat paved road. I walked more than I care to admit. It was awfully embarrassing. Vans from the race would drive by and I’d know that they knew what and easy leg this was and I’d cringe with the shame of my walk but I was just so tired. I pulled myself together for the last quarter mile and ran in to the exchange, I still had some pride.
Lucky for me (and her) Katie’s knee held out long enough for her to finish her last leg. I was very relieved that I didn’t have to go back out there. Once I discovered how exhausted I was it was really hard to ignore and I dragged through the rest of the day even without additional miles to run.
So that was the race. We made it in 34.22 hours or something. Ok, to be honest I don’t remember how many minutes it was but 22 sounds about right so I’m throwing it out there. I got a medal, it’s shiny and orange and it doubles as a bottle opener. It also makes security personnel suspicious when they x-ray your baggage.
We had some foster care proceedings this past week and I hadn’t cleaned out my purse since the trip. “uh, ma’am? is that a can opener?” the security worker at the courthouse asked, befuddled. It took me a minute to figure out what he was talking about. “Oh, that’s just my medal,” I explained like it’s a normal thing to carry a medal around in your purse. You never know when you’ll have need of such a thing. Really, how could I leave home without it? 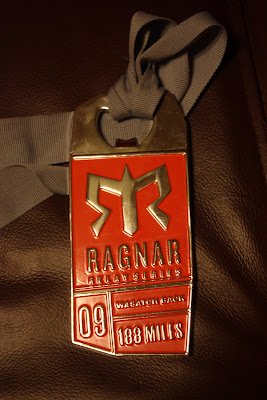 4 Responses to The Race