I, along with the Mr and some friends, ran a 5K at the Zoo yesterday morning. I learned a thing or two during this, my first race.
1-Hills are a pain
2-I’d prefer never to run in the light of day
3-I’m every bit as slow as I thought I was.

The real miracle of the event was finding a babysitter who was willing to come at 6 am. Granted, her mother accepted the job on her behalf, but she insisted she didn’t mind.

I was challenged to wear the race t-shirt for the rest of the day. Mind you, this was not the shirt I wore to run the race, but the t-shirt that came with the entrance fee. So, there was no stinking or lack of personal hygiene involved in the challenge.
At least, that was the case until moments before this photo was taken. 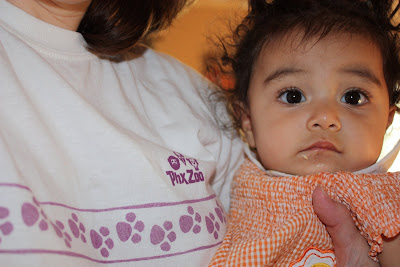 What the photo doesn’t tell you is that sandwiched between the New One and myself is a healthy slathering of baby vomit. I snapped the photo quickly as proof of my having worn the shirt and removed my self from that puke soaked thing in short order.
Before you wonder what kind of wussy mother I am, not even able to abide a bit of spit-up on my cheap ugly t-shirt, let me just point out that the spitting child in question is nearing eight months old. During the past weeks as she’s begun eating more and more solid foods her chief exports (poop and puke) have grown increasingly smelly.
I’m counting the minutes until she reaches the stage where those exports naturally decrease in frequency.