My relationship with dogs/my dog has changed dramatically over the years. I discussed it briefly here, in my first ever blog post. Today, I’ll delve deeper into the topic. Let’s start at the beginning.
I was deathly afraid of dogs as a child. I remember standing in the snow, paralyzed with fear at the sound of jingling behind me. It could be a dog’s license jingling. The dog must be right behind me! What on earth was I going to do? After a while I figured out it was the metal zipper on the back pocket of my snow suit doing the jingling.
I stopped wearing that snow suit.
In my adolescence, I was an honorary member of a dog family. I learned to be comfortable around their dogs. It was giant step forward. Of course, we’d had a dog for the first eleven (or so) years of my life, and I’d never been afraid of him. Even when a kind old cocker spaniel meandered toward me, and reduced me to a shivering pile of tears on the side walk while school bound, I was not afraid of our Spiffy.
In the instance of the spaniel, her owner, Sister Morgan, saw us from her window, (Me, weeping in terror. Her sweet dog, looking up at me confused as to the source of my distress and probably trying to lend comfort with her presence) and came to my rescue, calling her dog home and consoling me as best a kind neighbor can.
And so, I made it to adulthood no longer horribly afraid of dogs but not comfortable with them to say the least. I could hold myself together in the presence of a canine, but only just.
This was ridiculous, I decided and set out on a course of self analysis. What I came up with is: I learned my fear of dogs from my mother. She didn’t freeze and cry when approached by wandering dogs. In fact, I have memories of her bravely telling those same, tail wagging wanderers to “go home!” when they approached us on walks. That’s just it though, she was just as anxious for them to leave as I was. She wasn’t afraid they’d “get” her like I was, but she was mighty uncomfortable having them around and I could tell.
Once I figured this out I decided that once and for all, I was going to get over my fear of dogs. If not for me, then for my children. It is no fun standing stalk still in the snow perchance your outerwear is actually a sneaking dog. Crying in terror at the approach of a friendly neighbor of the four legged persuasion is no way to start your day. I would learn to love dogs in order to spare my future children that pain.
So, I told myself I liked dogs, and that I wanted one. I spent hours researching breeds and pined away waiting until we were in a situation where we could have one. That’s when Mouchoir entered my life. 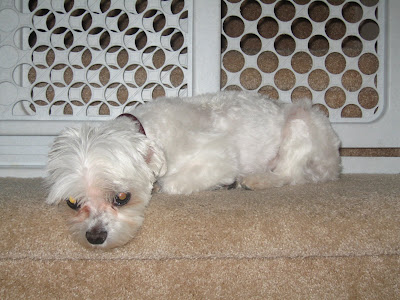 Side note- This isn’t the picture I wanted, but it’s the best I can find. Gahh, switching computers is troublesome.

He was so itty bitty he couldn’t climb the stairs on his own. We bought him some puppy treats, the smallest we could find, but he couldn’t get his wee jaws around them. He did like Kleenexes, however. That’s where he got his name. It’s French for Kleenex.
We loved him and coddled him and spoiled him.
Then we had a baby.
I continued to love “Mouch” after Zizza was born. I took more notice of his flaws though. The incessant barking any time any object moved within sight of our front window, the failure to potty train, the attacks on my ankles whenever I ventured to leave the house.
After Enzo was born I couldn’t take any more of it. We hired a dog trainer who helped immensely but pointed out that if we want him to behave, we have to put in the time working with him.
Here’s the thing, I’m busy. I’ve got kids to look after and potty train, I only have so much time for the dog.
He is much better than he was two years ago, but I don’t generally see that. What I see is him biting my ankles when I tell him to get in his Kennel and raising holy hell when people come to my door.
Bottom line, I don’t love him anymore.
I’ve become my mother after all. I tolerate the dog in my house hold for the sake of the family at large.
I’m not her though, because I remember loving him and I’d really like to love him again.
I’ve been working on that this past week. I let him come in the car with me when dropped off and picked up from dance class and preschool. I invited him to sit by me and even patted him while he was there.
I thought we were making good progress.
This morning I was crouching, taking inventory of the quiet toys in my church bag. I smelled poop. I was confused, the Mr was up stairs changing a diaper but surely I wouldn’t smell it at such distance. Then I noticed the dog walking by, “you stink, Mouch” I said, thinking he must have passed gas. Then, as I looked to my right I saw, not two feet from me, a fresh log of poo. (If indeed, a 4.5 pound dog can be said to produce such. “Twig” might be a more accurate description, but I digress)
“You did that while I was sitting right here?” I said to the guilty dog.
I stalked to the back door, threw it open and turned to order him out when something caught my eye. Another piece of poo. This one, smashed. But… how?
Then I looked at the bottom of my shoe.
I hadn’t seen the second piece because as I crouched there, on my toes, he deposited it right under my foot. So when I stood. I squished it.
I’ve never been so thankful not to have carpet in my living room and I don’t know where this leaves me dog-wise. I had really thought we were getting to be friends again.