Zizza went through a cape phase last September/October. But here’s the thing, she didn’t have a cape.
To fill the void she started wearing the kerchief that came with her foam rollers tied about her shoulders. It made a very sorry looking cape. 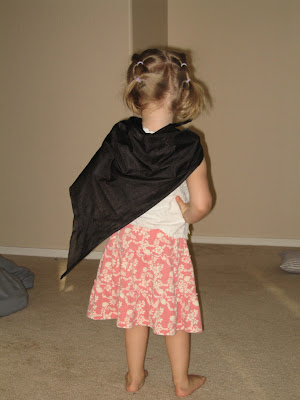 See what I mean?
Since it was made to secure rollers to one’s head while sleeping it is rather ill suited to use as a cape.
There are two ways to tie it on. If you use the long side of the triangle to tie ’round the neck, you get a decidedly neckercheif-like effect. Since the girl wasn’t out to portray a den mother, that wasn’t ideal.
If you tie it by a short side it hangs all skewampus as you see above. Skewampus? yes, but it did the job.
Well, she was having such fun with her make-shift cape, and her birthday was coming up, so you can probably guess where this is going…
Enter, the fabulous reversible birthday cape! Side one, 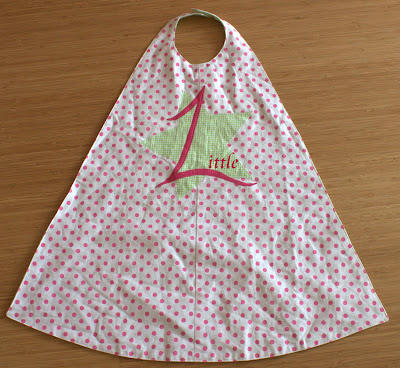 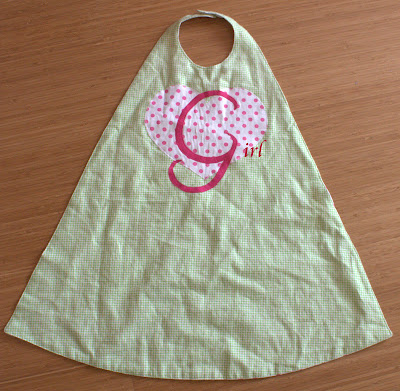 Hurrah! three cheers for the new cape! It hangs straight down the back, it has polka dots and gingham, it fastens with velcro so there’s no need to run to the mama for help getting it on, also, it won’t strangle you because velcro comes unfastened easy as pie! This is the best cape ever! Right?…Right?
I was so excited to give it to her, I had to restrain myself all day. Present time finally came, she opened it, and that was it.
She tried it on once for my sake, but then it stayed crumpled in the bottom corner of her dress-up box. At least she didn’t wear the other “cape” either. That might have been too much to bear. I was just too late, her cape phase was over.
Until last week. She put it on while I was scrubbing floors.
“We’re super heroes momma! What’s your super hero name?”
I told her I was “super cleaner-upper” and my power was cleaning floors. She declared herself “super little girl cleaner upper” and zoomed up and down the stairs shouting about her cleaning powers.
How my heart did swell.
The next day she took the cape to a new level of coolness by including it in this ensemble. 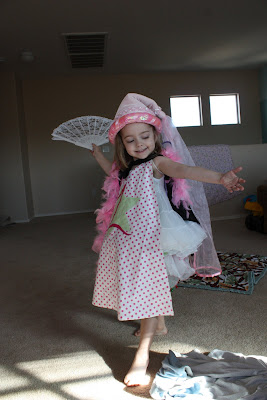 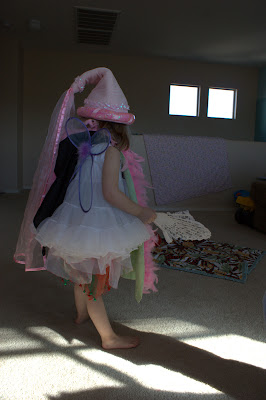 In case you couldn’t tell from the photos she is wearing two, yes two, fluffy slips, a flower petal tutu, a jingle bell tutu, a tinkerbelle skirt, a pink feather boa, purple fairy wings, a pointy princess hat with a scarf, and both capes. Also, she is waving a lace fan.
She wore it for hours. Only changed at dinner time when we made her.
And that, friends, is how the fabulous reversible birthday cape was redeemed.
Now, just for fun here are close ups of the awesome applique job. It’s my best applique work to date so I’ve got to show it off a bit.
Excuse the wrinkles will you? Remember the cape has been at the bottom of the dress-ups for the past three months. 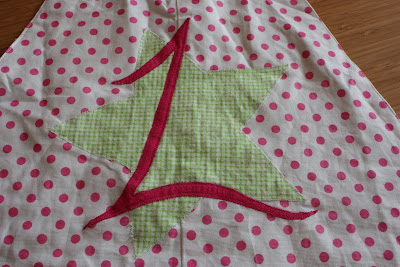 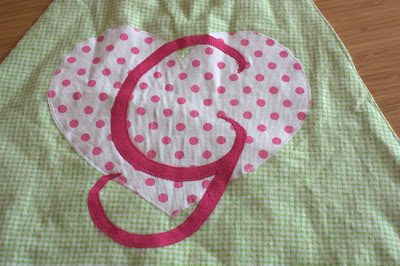