I really did make some of my gifts, I just never mentioned it. There were a lot of really great things that went on in December that I never mentioned. Anyway here are a few things I made.
The hat is for my brother. I was just crocheting along making an average beanie and then at the last minute I decided to try for a brim. I think it turned out ok for an experimental kind of thing. The only problem with the last minute change was, I did it all while snowed in on Christmas day and I didn’t have anything available to me for stabilizing such an after thought. I gave it to him unstabilized at our family party the next day. He even wore it sledding that way. I just made him give it back before I left town so’s I could fix it up proper. Here’s what it looks like now, Boy. It’ll be coming to you soon. 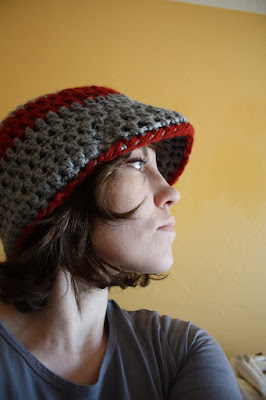 That same brother wanted to give his wife a handmade apron and called upon me for the handmade part. I got it done in plenty of time all except for buttons. The buttons were another after thought kind of a thing and I had nothing in my stash that would do. I kept thinking I’d make it to the store before we left but I didn’t so he had to give it to her buttonless.
I planned to measure the neck strap for button placement, and do the button thing while I was in town but that didn’t happen. I brought it home with me too. I put the buttons on and here’s what it looks like. Thanks to Zizza for the photo. 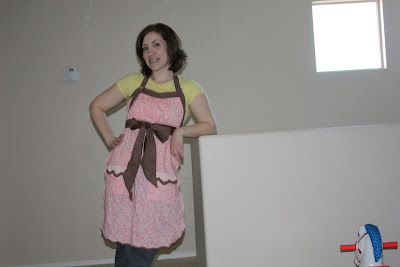 Now that you’ve enjoyed my awesome modeling skills. I’ll tell you that I also made another one of these in the same fabrics as the apron, gave a handful of hobby horses to various nephews and nieces and that did it for my holiday sewing.