My boy loves crayons, and pencils and markers… you get the idea. I guess it’s coloring that he loves, more than crayons.
His sister didn’t get interested in coloring until she was closer to three. I wonder to myself what made the difference. Did he become interested earlier because he saw her coloring, or is he naturally more interested in that sort of thing?
Mix a love of writing implements with an energetic not quite two year old and what do you get? That’s right, a mess.
We had the crayons out at kid level until just recently when his love really bloomed. I’ve been gathering crayons and tucking them away for the past few months. I thought I had them all but early this week he found one.
Generally if this occurs I either get him a piece of paper speedy quick before he finds his own medium, or thank him for finding it and put it away. This time though, it was a white crayon so I let him hold onto it.
And that is how Enz came to have a crayon as his constant companion. 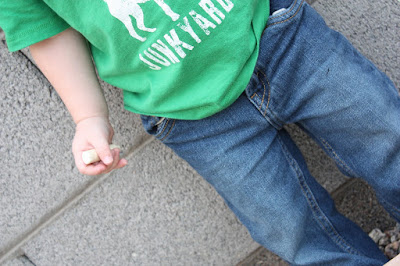 He kept it tight in his fist as he pulled up plants in the garden (don’t worry husband, it was just one small plant) 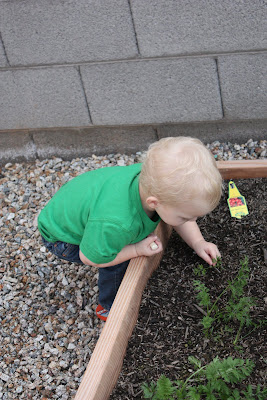 And later, when he sat down to rest for a spell his “eon” was there with him. Zizza noticed the crayon for the first time today and tried and tried to pinch it for herself. She had a hard time understanding why I was defending his sole ownership of the crayon. Blankies she gets, crayon love is beyond her grasp.