I am not so much a baby person. Don’t get me wrong, I like babies. There are a lot of babies I love, even. My own, for example.
What I mean to say is, I am not the type of girl whose arms ache with yearning any time there is a baby in the room. I like to smile at babies I happen to meet. That’s usually enough for me.
Once at a family function it was decided by the general population of the hallway where I stood that I should hold the baby of a cousin.
The child was handed to me and I stood there. Holding it. Trying not to make it painfully obvious to the baby’s mother that I actually had no interest in her darling boy. It was all terribly awkward.
That being said, if that cousin had needed someone to hold her boy while she attended to some necessary task, or just to give her a break, I would have been happy to help. The part that was the problem was the assumption that I wanted to hold the child for no other reason than my own delight when I took no such thing from the situation.
This is why I do not offer to “let” people hold my babies. I assume that if a person wants to hold the baby, they’ll ask.
Now that I’ve told you all about my stone heart, let me introduce you to someone.
This is my nephew. 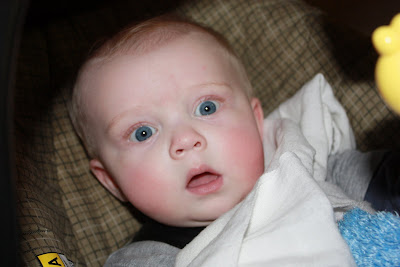 I think he was afraid of my camera. 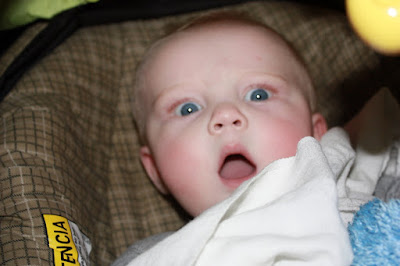 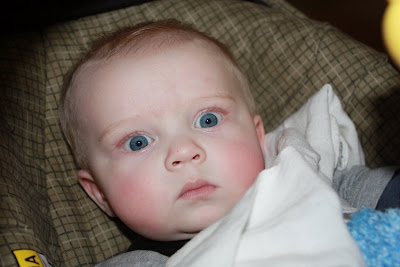 Anyway, back to the story. When I saw him, for the first time since July, on Christmas Eve it was all I could do to keep my hands to myself.
Lucky for me there were plenty of people around who wanted to hold my bitsy little babe so I was free to squish his sweet fatness to my hearts content. It’s a good thing I got that squishing in because by the time I get back up to Utah he’ll be big enough to protest.
In the mean time I’ll keep working on my New One’s squishability. I’ve always wanted a fat baby, maybe if I feed her enough she’ll make that dream come true for me.