My Boy is finding his will.
Recently I’ve found myself saying things like “Tiny stop, stop…STOP” and “Get down please. climb down Boy. BOY. DOWN. NOW. GET!” an awful lot.
This happened on Tuesday. 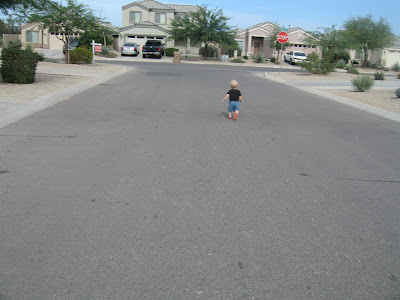 He made a break for it while I was getting the stroller out. I had the New One strapped to my chest in the Ergo Baby and thus couldn’t run to catch him, not if I wanted to avoid giving anyone a severe case of shaken baby syndrome anyway.
The Dog caught up with him, no problem. The Dog could run 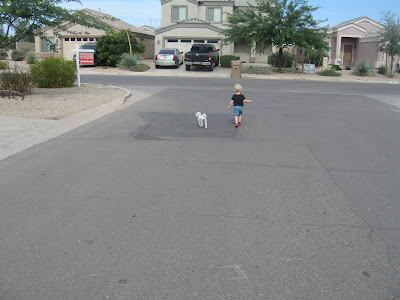 Meanwhile, I walked as quickly and smoothly as possible, all the while calling the boy and snapping photos from behind.
Lucky for me he noticed the rocks in the neighbors yard at the end of the street and stopped to pick up a few. That delay cost him his lead and I hauled him back to the house.
I was rather discouraged about the loss of his obedience until later that night when I regained hope.
He picked, for his after dinner piece of Halloween candy, a banana dum-dum. If I’d realized it was banana, I never would have let him have it.
Evils such as artificial banana flavored candy are relegated straight to the trash in this household.
He took his time eating it, rubbing it on his face and hands, trying to rub it on the faces and hands of his family members and making his parents nauseous. The fake banana fumes finally became too much for the Mr and he directed the Tiny to throw the dum-dum in the trash.
Tiny was heart broken, he had really been enjoying himself smearing that tangible gag reflex all over himself and others. Still, he took his prize and threw it in the trash, crying all the way.
It was heart breaking.
Don’t worry folks, his obedience did not go unrewarded. He got a second piece of candy. This time though, the Mr picked for him. It would never have done to have him choose another intolerable sweet.
Tiny ate his fun size Nestle Crunch bar with a relish. Even in spite of the fact that none of us wanted it smeared on our arms either.